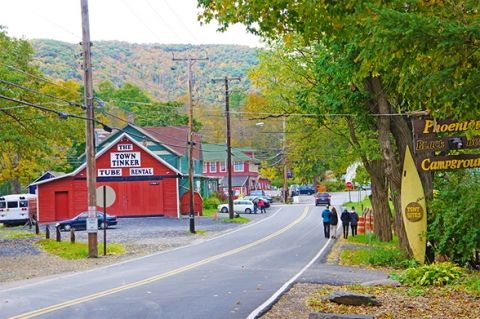 Above: The Ulster County town of Shandaken will receive $415,000 in state funds to fix broken pipes in Phoenicia, part of $26 million in state grants won by Catskills organizations and municipalities today. Photo via PhoeniciaNY.com.

The winners of the annual battle royal for New York State’s grant funds were revealed on Thursday, Dec. 10 at a press conference by Gov. Andrew Cuomo, and the Catskills took home about $26 million, according to our quick and dirty calculations. (See the state's list of grant winners here.)

Every year, the governor asks organizations and municipalities across the state to compete head-to-head for state funding for projects that range from grants for new businesses to funding for aging sewer systems. The funds come from the Regional Economic Development Council Initiative, which earmarks $750 million in state development funds annually.

(It's important to note that the state doesn't just hand out checks. Many of the grants are paid out as reimbursements to organizations that have to front the money some other way. Some grants never get paid out at all.)

In 2014, Catskills organizations brought home about $15 million, so the region’s piece of the pie is getting larger. Seven Catskills-region projects received over $1 million in funding this year.

Among the biggest winners were the village of Monticello, which gets $2.5 million, the largest grant in the region, to better disinfect its water supply; Wildberry Lodge in New Paltz, which received two grants totaling $1.75 million to build a waterpark resort and conference center; and the village of Walton, which received $1.5 million to build a methane digester at its wastewater treatment plant.

Other notable winners are the Roxbury Motel in Roxbury, which received $1.3 million to fund its plans to turn a mansion next to a waterfall into a theme hotel and scenic trail; Empire State Cooperage in Roscoe, which got $1 million to create a factory that will manufacture oak barrels for distilling; and two Kingston development projects that aim to revitalize the city’s Woolworth’s building and Mid City Lanes bowling alley.

A few other Catskills projects got smaller but much-needed awards that are worth noting. The town of Shandaken received $415,000 for vital repairs to the Phoenicia Water District, which has been piping water to many of its customers through a fire hose for almost a year. The town has been worrying about how to fund the repairs, according to the Catskill Mountain News.

The historic Parrott House in Schoharie received $300,000 for repairs. The 1870 inn was badly damaged in 2011 by Tropical Storm Irene, and has been moldering at the heart of town ever since. It was purchased by new owners in August who plan to manage the repairs and open shops and apartments in the structure, according to the Times Journal.

Trout Unlimited has received $215,539 to study how to improve the stream habitat of the Willowemoc Creek for trout.

The granting process divides the state into 10 economic development regions, and the Catskills are sliced into four of those regions: the Mid-Hudson region (Ulster and Sullivan county), the Southern Tier region (Delaware County), the Capital Region (Greene County) and the Mohawk Valley region (Schoharie County).

Being divided is a mixed blessing. The Catskills as a region tends to get overlooked, and projects that do receive funding are scattered randomly rather than planned in a way that would benefit the area as a whole.

But at least one Catskills county lucked out this year: Delaware County in the western Catskills is part of the Southern Tier, which won an extra $500 million in this year’s contest, part of a one-time $1.5 billion Upstate Revitalization Initiative grant that was given to three regions in the state out of funds levied on mischievous financial firms. (The two other lucky regions were Central New York and the Finger Lakes.)

Whether any of that $500 million will ever reach the Catskills is unclear. In the press release announcing the winners, the section on the Southern Tier did not mention any Catskills projects.

Here’s our breakdown of Catskills projects that did get funded. Seven organizations in the region received more than $1 million in funds this year. Here they are from largest to smallest:

The village of Monticello will use the funds to install an ultraviolet disinfection system at the village’s wastewater treatment plant.

The Turk Hospitality Group plans to build Wildberry Lodge into a resort, conference center and indoor waterpark in New Paltz, and has received two grants to help it out, one for $1.25 million and one for $500,000.

The Delaware County village of Walton will build an anaerobic methane digester at its wastewater treatment plant with $1.5 million. The digester is intended to help process waste milk and milk byproducts from the Kraft Heinz manufacturing plant in Walton, according to the Mountain Eagle.  After new owners threatened to close that factory it earlier this fall, the Kraft plant won a separate cash infusion in the form of $25 million in state funds in exchange for staying open for five years.

The Roxbury at Stratton Falls: $1.3 million

Greg Henderson and Joseph Massa, the owners of the Roxbury Motel in the Delaware County town of Roxbury, will receive $1,330,000 in grant funds to renovate a historic mansion next to the Stratton Falls waterfall into an extension of their popular theme hotel. Their plan calls for seven theme rooms in the mansion, eight new theme cottages nearby and a new scenic waterfall trail near the falls.

A new stave mill and cooperage based in the Sullivan County town of Roscoe will receive one million dollars to build a factory that will make white oak barrels for wineries and distilleries to use for making booze.

A proposal to revamp Kingston’s old Woolworth’s building into a food and beverage manufacturing facility has won one million dollars. The facility will include a commercial kitchen, a business incubator, a food education center, a supermarket and multiple restaurants.

RUPCO will get $1 million to remodel the former Mid City Lanes bowling alley in Kingston into a 15,000-square-foot affordable housing, tech incubator and food hub.

We break down the Catskills grants below. Ulster County did the best by far with about $8.6 million. (Want more detail? Want to doublecheck our number-crunching? Click here to see the state's full list of 2015 grant recipients.)

In other grant news, the towns of Conesville and Hunter each received $400,000 in state Community Development Block Grants on Thursday. Those funds will help rehabilitate structures in the two towns.