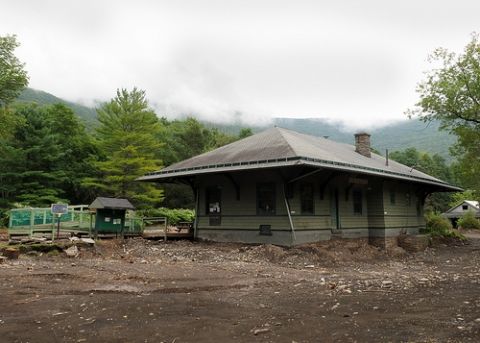 Above: The Empire State Railway Museum in Phoenicia on September 5, 2011, a week after Irene flooding damaged the building and grounds. Photo by Flickr user fixbuffalo; shared in the Watershed Post's Flickr group.

Over a year and a half since the Irene and Lee floods wreaked devastation on the Catskills, the long work of recovery is still going on.

This week, the Catskill Watershed Corporation announced a new initiative: a grant program to help nonprofits that were badly damaged in the 2011 floods. The program is open to any 501(c)3 organizations or state-chartered museums with buildings located inside New York City's Catskill-Delaware watershed.

Since the floods, the CWC has distributed over $3 million of a $5 million special fund set up to distribute recovery grants to flood-damaged local businesses. With that program winding down, CWC attorney Tim Cox said, the CWC is turning its attention to its fellow nonprofit organizations.

"The board always recognized that the need for not-for-profits was out there," Cox said.

The funds for the program, which is funded out of what remains of the CWC's business-oriented Flood Recovery Grant Program, are small -- just $100,000, according to Cox. But for small nonprofits that have had little or no help from FEMA, every dollar counts.

Under the terms of the program, grants of up to $10,000 will be made for reimbursement of the costs of structural repairs or replacements made to buildings. Buildings used for religious or residential purposes are not eligible for the grants.

Like local Main Streets, the Catskills nonprofit community was hit hard by Irene. Floodwaters submerged the building that houses the Open Eye Theatre in Margaretville -- and, across the street, inundated the nonprofit CWC's own offices with 17 inches of water and mud. In Claryville, the Frost Valley YMCA was cut off from the world for days by washed-out roads, and sustained almost $1 million worth of damage.

Nowhere did Irene deliver a crueler blow to local history than at the Zadock Pratt Museum in Prattsville, whose curator described the scene that met her eyes after Irene's waters receded, in a summer 2012 column for Green Door Magazine:

...the worst discovery that day was in the Carriage House behind the Museum. That’s where we stored our books, photographs, newspapers, files, and other paper ephemera. While the Museum had taken on three feet of water, through some fluke of fate, the Carriage House had flooded seven feet, soaking all of our paper collections. Gone were the hundreds of black and white photographs of local people from the 19th and 20th centuries. Gone were the fourteen scrapbooks of 20th century Prattsville history that had been recently donated to the Museum by a local resident; in those books were the names and photographs of the townsmen who had served in WWI, WWII and beyond. Gone was the leather-bound book of Minutes that had been held in the Old Stagecoach Inn at the west end of town (it, too, had been devastated by the flood) in which the first town meeting had been recorded in 1832. After the initial shock of loss, the task of recovery beckoned us forward.

Nonprofits that want to apply for the CWC grant program can contact the economic development office for an application form by calling 845-586-1400. The deadline for grant applications is April 30.

If the CWC receives more applications than can be funded, Cox said, projects will be selected based on four criteria: amount of structural damage incurred, impact of the organization on the community, feasibility and resonableness of cost of repairs.