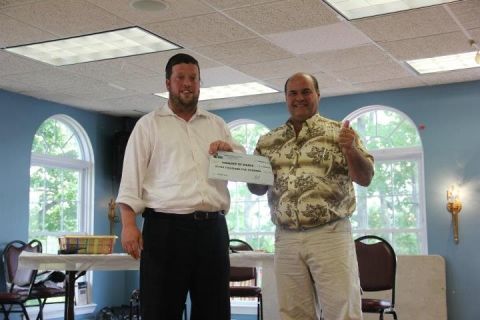 Is Oorah a good neighbor? It depends who you ask.

Oorah, a large nonprofit that runs two Orthodox Jewish summer camps on the site of the former Scotch Valley ski resort, has property that straddles the Schoharie County towns of Jefferson and Gilboa. In Jefferson, an ugly legal dispute is brewing between Oorah and the town over the camps' nonprofit status. In Gilboa, the relationship between Oorah and the town is a good deal friendlier.

Last week, the Mountain Eagle reports, Oorah re-filed a lawsuit against the town of Jefferson, after the town sought to have Oorah's original lawsuit thrown out on procedural grounds.

Oorah is seeking property tax exemption, which the town has refused to grant, claiming that they have unanswered questions about whether the camps serve a charitable purpose. The lawsuit, filed in state supreme court, seeks to overturn the town's decision. According to the Mountain Eagle's account of last week's town meeting, Jefferson supervisor Dan Singletary has other worries about Oorah's camps as well:

“I believe the town of Jefferson has an obligation to the parents and children attending Oorah’s camp to make a reasonable attempt to get Oorah to abide by the health and safety laws of New York State,” stated Singletary. “It has come to my attention that accidents at the camp have not been reported to the Schoharie County Health Department as required by Article 7 of the health law. The county health department has not received any notices of accidents at either the Gilboa camp or the Jefferson camp since they were established. I have asked for an inquiry.”

If Jefferson loses its battle to keep Oorah's property on the rolls, the loss of tax payments would be a major blow to the town's bottom line. As a Wall Street Journal story about the dispute noted in April, Oorah's tax payments support 5 percent of Jefferson's school budget.

Oorah, an Orthodox Jewish charity, is the town's biggest nongovernment taxpayer and last year contributed $208,399 to its budget...

...During talks over the bond issue, Oorah offered to pay Jefferson $41,000 a year in lieu of taxes for five years, said the charity's spokesman, Andrew Moesel.

The camp enjoys a cozier relationship with the town of Gilboa, which is not challenging Oorah's bid to get its properties declared tax-exempt. Last month, Oorah donated $7,500 to the town, whose supervisor Tony VanGlad visited the camp to collect the check. Here's an account of the visit from Oorah's blog:

Rabbi Avraham Krawiec, camp director, presented Tony with a donation of $7,500 in recognition of services that the town provides our camp, such as fire and emergency services. He then introduced Tony, amid enthusiastic cheers of “Tony! Tony!” from the girls.

Tony acknowledged the generous donation and said he was happy to have such a great camp in his town. He assured the campers that he wouldn’t do anything boring with this donation, like building roads. The dining room exploded with cheers of “amusement park! amusement park!” Tony laughed and said a park might just be in the plans.

The presentation was a true Kiddush Hashem, showing the local populace what a special camp lies in their midst.

The Mountain Eagle's Erika Eklund painted a very similar picture of the event:

“Thank you all so much,” said VanGlad to the assembled campers. “I am so happy to be here today and happy to see so many wonderful young ladies having a good time at camp.”

VanGlad said one of his favorite things about being town supervisor is having guests visit and seeing them enjoying everything the town has to offer.

Update, 5:15pm: Oorah spokesperson Andrew Moesel sent us the following statement in response to this post:

Oorah has been a very good neighbor to Jefferson, helping to revitalize a once abandoned property, hiring local employees and aiding several communities repair the damage from the recent hurricane. We made repeated overtures to offer generous compensation in lieu of property taxes, which we are exempt from by law. Regrettably, the town leadership rejected the commitment to make those contributions, and we are saddened that the situation will now cost taxpayers more money in the courts. We look forward to continue to adding to Jefferson Township and making it a better place to live and work.