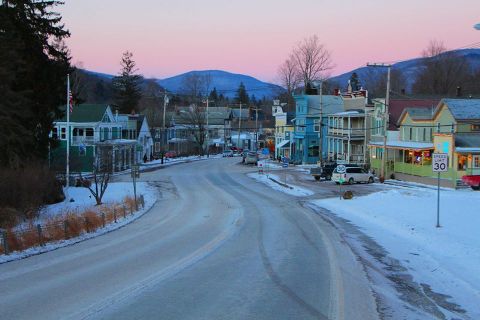 A highway runs through it: Route 30, Roxbury's Main Street, on a chilly January afternoon. Photo by Greg Henderson.

In the rural Catskills, "economic development" often doesn't mean big-ticket projects. For the MARK Project, a nonprofit based in the Delaware County town of Middletown, it can mean helping a local small business build a website, install bookkeeping software, or buy a critical piece of equipment.

Through their Small Business Development Fund, the MARK Project has given small grants and loans for projects like these to over 60 local businesses, most of them in and around Middletown. On Thursday, Feb. 20, Gov. Andrew Cuomo announced the approval of a $250,000 grant to the MARK Project to continue and expand the program.

The grant money will be used to expand the program to the nearby towns of Roxbury and Andes, said Peg Ellsworth, executive director of the MARK Project.

"It's very exciting to be able to continue that fund," she said. "We'll look at Bovina as well. It will be a combination of grant and loan funds."

Most of the grants and loans given through the fund will be under $5,000, Ellsworth said, although the MARK Project may consider larger projects as well. Businesses can get help with a wide variety of projects, she said.

"It's really wide open. It's not wedded to any particular brick-and-mortar project," she said. "We'll look at marketing, we'll look at website development."

Among the projects boosted by the MARK Project's Small Business Development Fund over the last few years: New-business startup help for Spillian, the Crazy River Cafe and Pepacton Bait and Tackle; a new community workshop space for the Catskill Mountain Artisans Guild; a marketing campaign for Pine Hollow Lodging; and business software for the Tinderbox.

Last week's announcement was expected for some time, Ellsworth said. The grant was among $91.1 million in awards announced in 2012 through the Southern Tier's Regional Economic Development Council, one of ten regions statewide that compete for annual economic development grants from a variety of state programs. Ellsworth serves on the Southern Tier council.

Cuomo's recent news release announced approval for seven projects in total, adding up to $5.9 million in funding for projects in four regions. Also announced in the release were $750,000 in funding to build a natural gas pipeline to a plant run by Amphenol -- in Sidney, at the western end of Delaware County -- and a $200,000 grant for Kingston manufacturer Ertel Alsop to buy machinery for a plant that makes equipment for wastewater treatment plants.

Catskills organizations awarded $26 million in state grants
DEC gives $400,000 in grants to fund parks, paths and signs in the Catskills