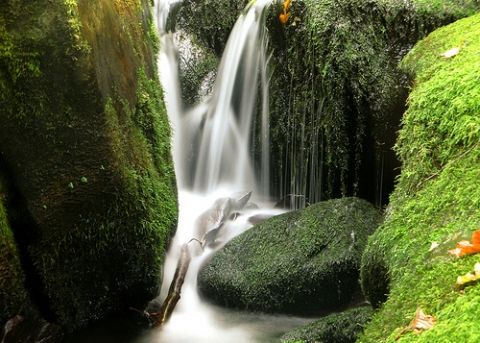 A flowing Catskills stream, photographed by James McCracken in Hunter. A newly-revised midterm draft of a ten-year plan for the management of New York City's unfiltered watershed calls for almost $40 million in new funding to keep the Catskills' many pretty little streams from flooding towns and villages, as they did in 2011 during Tropical Storms Irene and Lee.

A document recently released by the state Department of Health (DOH) is full of more alphabet soup than a Campbell's warehouse. But within the acronym-laden government jargon is some big news for the Catskills, the home of New York City's vast unfiltered west-of-Hudson watershed.

A ten-year plan drafted in 2007 for the management of New York City's unfiltered watershed -- dubbed a Filtration Avoidance Determination (FAD) -- has just gone through a midterm review by the state and federal agencies that regulate New York City's water system. In a release issued today, the state DOH announced that some significant changes have been made to the FAD for the rest of its ten-year term, including some made in direct response to the catastrophic flooding visited upon the New York City watershed region in 2011 by Tropical Storms Irene and Lee.

Some of the changes will be welcome news to counties, towns and villages in the New York City watershed. The state DOH -- which produced the revised FAD in consultation with the federal Environmental Protection Agency (EPA) -- is calling for the city Department of Environmental Protection (DEP) to spend almost $40 million on new stream restoration projects aimed at preventing flooding in watershed communities. The revisions are open to public comment until October 15, 2013.

A few of the programs called for in the newly-revised FAD:

Since the Irene floods, counties and towns have been calling loudly on New York City for help with flood protection. In November of 2011, the Delaware County Board of Supervisors endorsed a paper calling on the DEP to take money from their land acquisition program -- which buys vacant land in the watershed in order to prevent it from being developed -- and invest it in flood mitigation, arguing that working to prevent flooding would be better for the city's water quality than setting aside more land from development.

The current draft of the revised FAD does not call for shifting funding out of the city's land acquisition program; in fact, it calls for another $50 million to be set aside for land acquisition. But in the revised FAD, state DOH officials write that the Irene floods caused "heightened awareness" of the impact that flooding has on water quality -- a shift in priorities that has apparently convinced state and federal officials of the value of putting more money into flood mitigation.

New York City's DEP is regulated by several larger state and federal entities, including the DOH. If the DEP does not abide by the terms of the FAD, the state DOH may fine them up to $25,000 a day for each violation, or force the city to build a plant to filter its water -- a costly proposition for the city, to the tune of $10 billion or more.

Click here to view the full text of the revised Filtration Avoidance Determination on Scribd. To submit comments on the FAD to the state Department of Health, send them by mail to NYSDOH Attn: Pamela Young, Empire State Plaza, Corning Tower Room 1110, Albany, NY 12237. Comments can also be emailed to [email protected].

We will keep track of reactions to the revised FAD from local, city and state agencies and organizations on this post. What do you think of the changes and proposed programs? Let us know at [email protected].

Reactions to the revised FAD:

"The Department of Environmental Protection has committed new funding for programs to address flood hazard mitigation in the aftermath of Tropical Storms Irene and Lee. These programs, along with others outlined in the Filtration Avoidance Determination, will help the Department maintain the safety and reliability of a robust water supply that serves 9 million New Yorkers every day, and they will also improve infrastructure to protect our neighbors across the Catskills."

"The release of these revisions are a step forward in the process, and my Watershed Advisory Group has begun a review and analysis of this document. Given the complexity of the issue and number of stakeholders involved, this will take some time. Principally, we are looking for effective flood mitigation strategies for Upstate communities, resolution to turbidity issues throughout the watershed, and equitable policies that balance the need for the conveyance of clean water to NYC with the economic viability and safety of communities in my district.

"DOH is accepting comments on these revisions through October and I urge my constituents to weigh in. I would also encourage them to share that feedback with my Watershed Advisory Group so that we may effectively analyze constituent and stakeholder concerns and input on this important issue.

"Furthermore, I urge the DOH to carefully review comments submitted. My goal is to bring all parties together so that the best possible outcome is achieved through this process.”