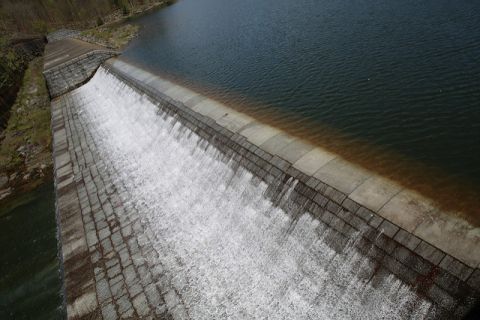 Above: The Cannonsville Dam's spillway. Image by the NYC DEP, via Flickr.

In the wake of a drilling incident at the Cannonsville Dam in the Delaware County town of Deposit last summer, the New York City Department of Environmental Protection (DEP) has received federal approval to postpone the construction of a 42,281 megawatt hydroelectric dam at the site for two years, according to a DEP press release issued on Wednesday, May 4.

Construction on the dam had been slated to begin on May 13. DEP officials got word that they would be allowed to postpone construction on April 21, according to the press release. Now the DEP wants to reexamine the feasibility of the project.

Workers drilling test borings for the future hydroelectric facility caused a gush of muddy water to appear downstream on July 8, 2015, causing the DEP to partially drain the Cannonsville Reservoir for three weeks while conducting numerous tests to make sure that the dam itself was not compromised.

The dam was found to be sound, and repairs to an artesian aquifer downstream of the dam eventually stopped the flow of turbid water.

Still, for safety reasons, DEP staff are glad that the Federal Energy Regulatory Commission (FERC) has extended the license to build a hydroelectric dam on the Cannonsville.

“The City is pleased that FERC has extended its license for the proposed Cannonsville hydroelectric facility, in effect recognizing that this proposal requires a new analysis to ensure the power plant is compatible with dam safety,” DEP Commissioner Emily Lloyd said in a press statement. “DEP will continue to update our downstream neighbors, watershed residents, and the general public as we make progress on this engineering study and other efforts related to the hydroelectric project.”

The DEP is petitioning federal officials and legislators to postpone the dam project even more: by eight years, according to the press release. This is because the agency's staff believe that it will take longer than two years to evaluate whether "the project can be constructed in a manner that is compatible with the highest standards of dam safety," according to the press release.

Read the full press release from the DEP below:

The New York City Department of Environmental Protection (DEP) on Wednesday announced that the Federal Energy Regulatory Commission (FERC) has granted a two-year extension of its license to build a hydroelectric facility on the release works at Cannonsville Reservoir. The license originally required DEP to begin construction of the facility next month. The City will use the additional time to reassess the design assumptions that yielded cost and revenue estimates for the power plant and to reevaluate whether, based on additional technical information, the project can be constructed in a manner that is compatible with the highest standards of dam safety. In addition to the extension provided by FERC, the City also continues to pursue a longer postponement through federal legislation.

“The City is pleased that FERC has extended its license for the proposed Cannonsville hydroelectric facility, in effect recognizing that this proposal requires a new analysis to ensure the power plant is compatible with dam safety,” DEP Commissioner Emily Lloyd said. “DEP will continue to update our downstream neighbors, watershed residents, and the general public as we make progress on this engineering study and other efforts related to the hydroelectric project.”

New York City received the two-year extension from FERC on April 21. Its license to build the hydroelectric facility at Cannonsville Reservoir previously required construction to start by May 13, 2016. The City has also been working with members of Congress to pass federal legislation that would postpone the project by eight years. Bills that include the longer postponement are still under consideration by the U.S. Senate and House of Representatives. DEP has pursued a longer postponement because it will likely take longer than two years to hire expert engineers and perform the new analysis. The additional feasibility study was also recommended by an expert Board of Consultants (BOC) that was formed specifically for the project as part of a FERC requirement. The BOC includes expert engineers from across the United States who reviewed data and geotechnical information after the drilling incident last summer.

In July 2015, DEP responded to a report of cloudy water being discharged into the West Branch Delaware River, just downstream of Cannonsville Dam. The discharge was discovered as workers drilled test borings to support the design and construction of the hydroelectric facility that was planned for the site. An investigation found that the drilling released groundwater under natural pressure, known as an artesian condition, several dozen feet below the surface. As the pressurized groundwater flowed upward it also carried sediment into the river. At the time, DEP increased its downstream releases and drinking water diversions from Cannonsville Reservoir for roughly three weeks out of an abundance of caution for public safety.

Materials testing, engineering analyses and instrumentation inside Cannonsville Dam showed that the structural integrity of the dam was never compromised by the transport of that sediment downstream. Federal, state, county and local officials—including officials from New Jersey and Pennsylvania—were regularly updated during the incident and while repairs happened at the site. Repairs were completed by expert geotechnical engineers in late August. Testing through mid-September, and observations that continued for many months, found that the repair work was successful. During and after the incident, DEP hosted more than 20 meetings with elected officials, downstream residents and business owners, and emergency response personnel to keep them apprised of the situation and progress on the repairs.

The proposed hydroelectric plant would generate an estimated 42,281 megawatt hours of electricity each year – enough to power roughly 6,000 homes and avoid the emission of 25,620 metric tons of greenhouse gases. The 14-megawatt power plant was expected to cost $72 million to construct. Its four hydroelectric turbines would produce power from water that is released downstream from Cannonsville Reservoir to meet flow targets and other terms outlined in a number of federal and interstate agreements.

DEP manages New York City’s water supply, providing more than one billion gallons of high quality water each day to roughly 9.5 million New Yorkers. This includes more than 70 upstate communities and institutions in Ulster, Orange, Putnam and Westchester counties who consume an average of 110 million total gallons of drinking water daily from New York City’s water supply system. This water comes from the Catskill, Delaware, and Croton watersheds that extend more than 125 miles from the City, and the system comprises 19 reservoirs, three controlled lakes, and numerous tunnels and aqueducts. DEP has nearly 6,000 employees, including almost 1,000 scientists, engineers, surveyors, watershed maintainers and other professionals in the upstate watershed. In addition to its $70 million payroll and $157 million in annual taxes paid in upstate counties, DEP has invested more than $1.7 billion in watershed protection programs—including partnership organizations such as the Catskill Watershed Corporation and the Watershed Agricultural Council—that support sustainable farming practices, environmentally sensitive economic development, and local economic opportunity. In addition, DEP has a robust capital program with nearly $14 billion in investments planned over the next 10 years that will create up to 3,000 construction-related jobs per year. For more information, visit nyc.gov/dep, like us on Facebook at facebook.com/nycwater, or follow us on Twitter at twitter.com/nycwater.