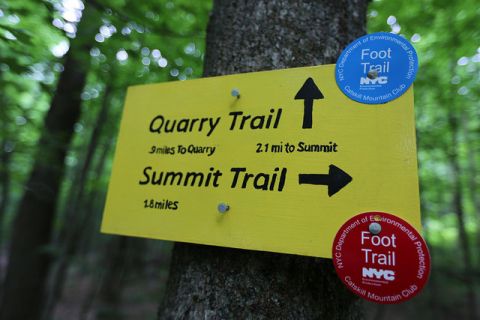 Above: Photos from the Bramley Mountain Trail via the NYC DEP's Flickr page.

A long-awaited new hiking trail will open in the Delaware County towns of Delhi and Bovina on Friday, July 29.

The fire tower is now gone, but its stone foundations remain, and visitors at the top can catch open views of the Catskills high peaks to the south and farmland to the west.

Above: One of the views from the summit of Bramley Mountain. Photo via NYC DEP.

Another section of the trail passes impressive cliffs, two large caves and an abandoned bluestone quarry. The whole route is designed to be moderately difficult for hikers of most abilities.

The trailhead and parking lot is located on Glen Burnie Rd. in the town of Delhi, about one mile south (and uphill) of its intersection with County Road 18.

Above: New sign for a new trail. Photo via the NYC DEP.

The trail is located on land owned by the New York City Department of Environmental Protection (DEP), and was built by volunteers affiliated with the Catskill Mountain Club (CMC). Its opening has been postponed several times; it was first slated to open in June 2015, and then in June 2016.

Above: Hikers on the Bramley Mountain Trail. Photo via the NYC DEP.

Above: Another summit view on the Bramley Mountain Trail. Photo via the NYC DEP.

The CMC and the DEP are hosting a ceremony and group hike to celebrate the trail’s opening at noon this Friday at the trailhead on Glen Burnie Rd.

Bramley Mountain Trail opening celebration and hike. Noon, Friday, July 29. Glen Burnie Rd. in the town of Delhi, one mile south (and uphill) of its intersection with County Road 18. GPS: 42.2993, -74.8360. Click here for more info on the trail from the Catskill Mountain Club.

Below: A topographic map of the Bramley Mountain Trail. To see a larger version in .pdf form, click here.