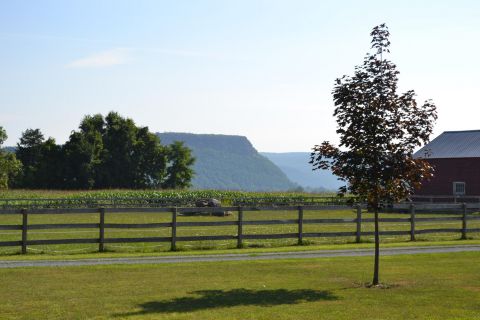 Twice this year, hikers have tumbled off the cliffs of Vroman's Nose, a mountain that looms over the Schoharie Valley and is a popular hiking destination for locals and tourists.

Now, a local fire chief is calling for changes to be made at the attraction.

On May 22, a 32-year-old New Hampshire woman was admitted to Albany Medical Center in critical condition after she tumbled off the cliffs.

Then, on Aug. 14, 26-year-old Middleburgh resident Jesse E. Papas fell about 30 feet from a trail on the cliffs and landed on a ledge, according to a press release issued by the Schoharie County Sheriff's Department.

Papas was rescued when a member of the Schoharie County Search and Rescue Team was lowered by rope to the victim. The incident involved emergency responders from over 10 agencies, including members of the Canajoharie, Conesville, Huntersland, Middleburgh and Rural Grove Fire Departments.

Above: First responders during a rescue at Vroman's Nose on Aug. 14. Photo via Schoharie County Fire Wire & News.

Papas was not seriously injured, but the two incidents together have prompted Middleburgh Fire Chief Michael Devlin, who was involved in the rescue, to reach out to the committee that operates Vroman’s Nose to ask that it consider making changes that will help make the trails and rescues safer for hikers and first responders.

The 600-foot cliffs that make up Vroman’s Nose are the edge of a mountain that rises starkly out of the Schoharie Valley next to Route 30 in the town of Fulton.

Unlike many of the natural attractions in the Catskills region, “The Nose,” as it is known to locals, is not located on public land.

Instead, the cliffs are owned and operated by the Vroman's Nose Preservation Corporation, a nonprofit organization formed in 1983 that is dedicated to protecting the mountain and keeping it accessible to the public from sunrise to sunset, according to the group's Facebook page.

Because the land is private, liability for accidents and rescues on Vroman’s Nose could be different than it would be if the land were publicly owned.

Devlin said that he wants to explore the legality of posting signage on the mountain that would help ensure that the cost of rescues are covered by the responsible party.

He also said that, with such a large number of visitors making the trek up the mountain, he recommends more trail clearing at Vroman’s Nose.

When contacted by the Watershed Post, a representative of the Vroman's Nose Preservation Corporation declined to comment.

Above: A parorama of the view looking east from the cliffs of Vroman's Nose, shot by Ira Goldstein. Shared on Wikipedia using a Creative Commons license.

Devlin told the Watershed Post that hikers need to respect the trail or risk jeopardizing their safety.

"People doing stupid things will get you killed really quickly at those heights," he said. "I really don't think hiking the Nose or any other of our beautiful trails is an issue, however people have to be smart, respect the trail and respect others so that that privilege is not taken away."

The Middleburgh Fire Department is committed to answering every call it receives, Devlin said. But there is a lack of public awareness with respect to the financial burden and technical difficulty that is involved in rescuing fallen hikers, he added.

"The public just doesn't know the cost involved in an event like this,” Devlin said. “Equipment and hours of training [are] needed to have successful outcomes.”

Hiking the Catskills ski mountains in summer
Despite safety improvements, another death at Kaaterskill Falls