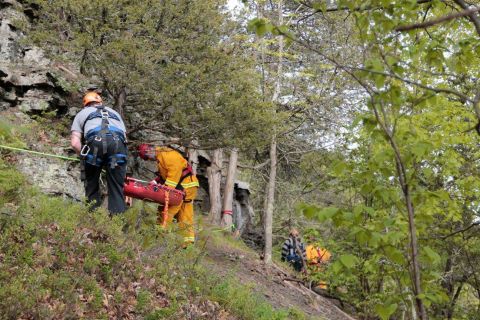 A hiker has been admitted to Albany Medical Center in critical condition with a back injury and a severe injury to her left wrist after tumbling off the cliffs of Vroman's Nose on Sunday, May 22 in the Schoharie County town of Fulton, according to Middleburgh Fire Chief Michael Devlin.

Vroman’s Nose is a 600-foot cliff that looms above the Schoharie Valley just outside the Schoharie County village of Middleburgh. It’s a popular spot for hikers and history seekers.

The woman, a 32-year-old from Lebanon, New Hampshire who is not being identified at this time, had been hiking on the mountain with a male companion when she fell off the cliff, according to Devlin.

After a 911 emergency call was received by Schoharie County Dispatch just after 4 p.m. on Sunday, multiple emergency and police agencies responded to the scene to try to rescue the injured hiker.

First responders found her a lying against a tree approximately 25 feet below the top of the cliff, according to a press release issued by the Middleburgh Fire Department and Devlin.

The Middleburgh Fire Department high angle rescue team—Jeremy Gordon, John Shaw Jr. and Brian Devlin—along with members of the County Search and Rescue Team used ropes to go over the edge of the cliff to reach the injured hiker. From there, they brought her up to the trail at the top of the cliff.

By 6:30 p.m., the hiker was extricated from the cliff and was transported a Lifenet Helicopter, which took her to Albany Medical Center.

Middleburgh Fire Chief Michael Devlin praised the efforts everyone involved, telling the Watershed Post: ”This was a great team effort by all agencies working together."