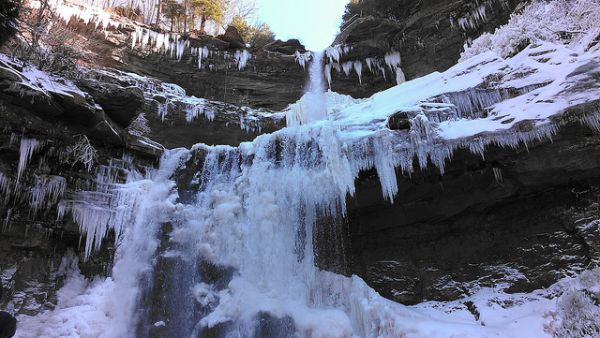 Kaaterskill Falls in the winter of 2013. Photo by Flickr user ooh_food; published under Creative Commons license.

Two hikers were injured in unrelated falls on Greene County trails over the weekend: one on Kaaterskill Falls, and another in Platte Clove.

Both hikers suffered head injuries, according to a New York State Department of Conservation press release.

At Kaaterskill Falls, a 26-year-old woman was hiking on an unofficial trail around 1:20 on Sunday afternoon when she slipped and fell roughly 80 feet to the bottom of the lower falls, suffering injuries to her head, back and legs. She was rescued by DEC rangers and local fire and emergency medical first responders, who carried her to the trailhead on Route 23, and taken by ambulance to a hospital.

Kaaterskill Falls is a popular but dangerous spot that regularly claims the lives of unwary hikers who stray from the official trails; a 30-year-old Newburgh man fell to his death at the falls in November. The DEC has made extensive -- and controversial -- safety improvements at the site since 2015, including signage and new fencing, but people still routinely disregard the signs and hike the dangerous unofficial path to the upper falls.

In an unrelated incident, a 27-year-old man fell about 50 feet while ice climbing in the Dark Side area of Platte Clove around 2:10 p.m. on Sunday. He was reached around 4:35 by DEC forest rangers, fire and medical first responders, who treated him for head injuries and hypothermia. According to the release, first responders had a difficult time reaching the man, and he had to use technical rope systems to hike out of the clove.

A week ago, on Monday, Jan. 23, forest rangers rescued a hiker who had gotten separated from a large group the previous day in the Big Indian Wilderness Area. The hiker spent Sunday night in the woods and was discovered Monday morning by a ranger crew as he was hiking out.

Hiking the Catskills ski mountains in summer
Despite safety improvements, another death at Kaaterskill Falls