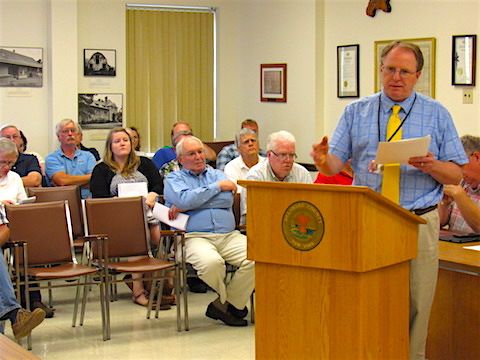 A hearing last week on the renewal of New York City's Filtration Avoidance Determination (FAD) gave local officials from the city's Catskills watershed an opportunity to complain about perceived overreach by officials of the city's department of environmental protection.

The FAD is a waiver, granted by the federal Environmental Protection Agency, which allows the city to avoid filtering surface water from its watershed west of the Hudson River. Filtering is otherwise required for surface water sources, such as reservoirs, by the federal Clean Water Act.

New York City's FAD was issued in 1997 and is renewable every 10 years. The hearing, held on Tuesday, June 21 in the Delaware County town of Delhi, was part of the renewal process for the 2017 version of the FAD.

It was one of a series of public meetings on the topic. Another meeting will be held this Wednesday, June 29 at Hunter Mountain in the Greene County town of Hunter at 7 p.m. Two more meetings on FAD will be held in July, one in Westchester County and one in New York City. For info, see the New York State Department of Health's website.

Pamela Young, a research scientist with the New York State Department of Health, opened the hearing with an overview of the city's watershed system and the existing FAD. She said that the west-of-Hudson watershed provides 90 percent of the city's water–about a billion gallons each day, serving 9.5 million people. The remaining water comes from reservoirs east of the Hudson, where no FAD was granted and the water must be filtered. She said that the world's largest ultraviolet treatment facility was installed to treat east-of-Hudson water in 2012.

The city obtained the 1997 FAD by convincing federal regulators that water quality could be maintained through land use regulations in the west-of-Hudson watershed. The imposition of those regulations led to the 1997 Memorandum of Agreement (MOA) between the city and the communities in its Catskills watershed.

The agreement limits land use in the watershed and provides funding from the city to offset the costs of watershed regulations.

A more recent water quality initiative is stream management. In the wake of floods that washed soil and toxins into New York City's reservoirs in 2006 and 2011, local officials convinced city regulators that floods are a threat to water quality and that flood mitigation is a worthwhile investment.

Young said that 79 stream stabilization projects have been done and 134 buffer area have been created to lessen the impact of floods, at a cost of $27 million.

Wide array of grievances about DEP

“There are drastic weaknesses in the system,” said town of Hamden Supervisor Wayne Marshfield. He called a washout along the west branch of the Delaware River “an embarrassment” that has gotten worse over time because repairs have been held up by city regulators.

“Sixty-five hundred yards of farmland has gone down the river, probably to the Cannonsville Reservoir,” he said.

Marshfield testified that engineers from the Delaware County Soil & Water Conservation District designed a project to fix the problem and secured federal funding to implement it, but, “time after time, a DEP non-engineer insists on going back to the drawing board.”

To resolve the stalemate, he said, an independent consultant was brought in to design a solution. The DEP inspector rejected that design, as well, he said.

Marshfield said that the Hamden situation is not an anomaly.

“There's been no stream projects approved by DEP since 2014. That's a fact,” he said.

Above: Bruce Dolph, the chairman of the Coalition of Watershed Towns, delivers comments at a hearing on the renewal of New York City's Filtration Avoidance Determination (FAD). Photo by Robert Cairns.

Bruce Dolph, the chairman of the Coalition of Watershed Towns (CWT), said that stream stabilization and economic development are the most pressing needs in the watershed. He said that the CWT is requesting that DEP staff involved in watershed management be housed within the watershed and that the city's land acquisition program be stopped.

Dolph also said that a third party is needed to resolve disputes.

Dolph acknowledged that city officials have made conciliatory gestures and statements in negotiations with watershed communities, but added, “it seems the translation is being lost for the staff on the ground, doing the work.”

Delaware County Watershed Affairs Commissioner Dean Frazier noted that Delaware County had generated a “white paper,” calling for relief from city regulations. He said that improvements to water quality have come from “partnership programs,” such as wastewater and farm waste management projects, and not from “a top-down, adversarial regulatory approach.”

“If DEP is going to be aggressive, they need to pay,” Frazier said. “Unjustified regulation is becoming too commonplace.” He said that there is no scientific justification for regulations that hinder small businesses.

Like Marshfield, Frazier found fault with the DEP's design approval process. He pointed to the lack of progress on the Delhi Riverwalk project, which proposes a recreation area along the west branch of the Delaware River.

“Four years for a river walk design? You've got to be kidding me,” he said.

Similarly, the river problem in Hamden has been going on for four years, Frazier said.

“Why four years of debate while pollutants go down the stream?” he asked.

Frazier said that the DEP “turned away” hundreds of thousands of dollars of federal funding for the Hamden project and agreed to pay for it itself while damage grows and repair costs mount.

Frazier, too, called for an end to the city's land acquisition program.

“I for one, would like to see scientific proof of the impact on water quality from land acquisition,” he said.

Walt Keller, a member of the Harpersfield Planning Board and village of Stamford Zoning Board of Appeals, as well as a retired fisheries manager with the New York State Department of Environmental Conservation, also spoke.

“I have what I think is a basic mistrust of New York City's management,” Keller said.

Keller said that he is concerned about the effects of climate change and invasive insect species that kill trees, potentially affecting ground water.

“This new FAD is going to have to start addressing these concerns,” he said.

Masonville town Supervisor Mike Spaccaforno was another who called for an end to city acquisition of watershed land.

“At some point, it's got to come to an end,” Spaccaforno said. He said that the loss of land is limiting economic opportunity. “We're dying up here in the county. There are no jobs.”

Spaccaforno also said that he expects the city to begin challenging tax assessments on the land it owns.

“Something's got to be done to ease our pain,” he said. “It's supposed to be a partnership. Seems like it's a one-way partnership so far. The city demands, we have react to it, we're not being compensated.”

Mike Triolo, the supervisor of the town of Stamford and president of the Catskill Watershed Corporation (CWC), asked that the city continue to fund CWC programs. He also called for additional “hamlet areas” where city regulations are eased and land acquisition is not allowed.

Triolo said that the city's stream management program in Delaware County is “at best ineffective and at worst a failure.” He said, “The city has a right to the water. The streams belong to us in the watershed and in the state.

“The problems in this program must be fixed immediately,” he said.

Triolo also called for a fire protection plan for city-owned land and co-location of DEP staff with CWC employees in Margaretville.

Rick Weidenbach, executive director of the Delaware County Soil & Water Conservation District, accused DEP regulators of micromanagement and said that they treat local municipalities “like vendors, rather than units of government.”

Weidenbach spoke at length about the stream bank project in Hamden, which was designed and approved for federal funding in 2013. He said that the DEP rejected both the design and the funding in order to substitute its own design. Even after a private engineering firm came up with a design for the project, he said, “DEP continues to interfere.”

Matt Krzyston, a town of Delhi councilman, said that some watershed programs “make a ton of sense,” but that he wants to see scientific evidence to support land acquisition.

“It really feels like the community is disrespected,” he said.

Delaware County Emergency Services Director Steve Hood said that DEP inspectors have interfered with the construction of an emergency communications tower in Grand Gorge, holding it up for 10 months.

“We have five more sites that are in the city's watershed,” Hood said. He said that similar delays with the remaining sites could cost the county $1 million.

Alan Sidrane, the owner of a bed-and-breakfast in Fleischmanns, said that DEP inspectors held up construction of a septic system at his business for 18 months. He said that granting a FAD to the city would be “negligence.”

Town of Middletown Supervisor Patrick Davis, who served that town as code enforcement officer for 12 years, said that the talk of partnership and cooperation between the city and the watershed communities “comes from people who don't put their boots on the ground.”

He said that partnership programs work because local “overachievers” make them work.

Davis said that land acquisition should cease until an analysis of its effectiveness is done.

He said that the DEP owns 14 percent of the land in Middletown and that the state owns 11 percent, placing a full quarter of the town in government control.

He also said that a lack of cooperation from the DEP will cause people to ignore watershed regulations.

“This is a very profitable system for New York City, not for the watershed towns,” he said.

Those who are unable to attend public comment meetings, but would like to comment of the FAD renewal, can send comments to [email protected] or to NYC Watershed Section, Room 1198 Corning Tower, Empire State Plaza, Albany, NY 12237.