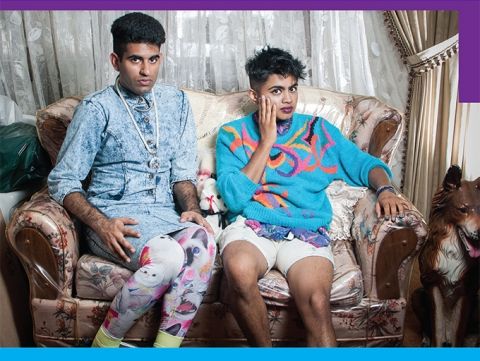 Above: Alok Vaid-Menon and Janani Balasubramanian, the members of Darkmatter, a trans south asian performance art duo that will appear at Mount Tremper Arts on Saturday, July 16. Image via the MTA website.

Mount Tremper Arts is expanding its public programming from a summer festival to year-round events.

The gorgeous artist-run space, tucked away on a maple-thick hillside off Plank Rd.–i.e. Old Route 28–in the Ulster County hamlet of Mount Tremper, begins its ninth performance season on Saturday, July 16 with South Asian trans duo DarkMatter, followed in August by theater company 600 HIGHWAYMEN. Both groups are based in NYC.

In the past, that would’ve been it for the year, performance-wise. (Since its 2008 inception, MTA has hosted year-round residencies, retreats, and rentals, and continues to do so.)

But rather than say goodbye to audiences for the colder months, programming will continue through the fall and winter with events like a December engagement with the acclaimed musical collective International Contemporary Ensemble.

After giving Watershed Post a tour of MTA’s restored early-1800s farmhouse where resident artists bunk, and the terraced gardens (featuring currants end up in jam for MTA’s donors), founder and Artistic Director Mathew Pokoik sat in the austere performance barn and spoke about the expansion.

“It’s time,” he said. “When we opened in 2008, we did so with a mix of stubbornness and ignorance. But now we know the area. We’ve developed relationships with local businesses, and the Catskill Interpretive Center. We’ve received grants from the [National Endowment for the Arts] and [the New York State Council on the Arts], so we’re not dependent solely on donors anymore. Plus, in the past, we’d be really active for seven weeks, then have to start from scratch again the next summer.”

The year-round performances will be presented under the moniker Watershed Laboratory. The name embraces the interdependence between New York City-based artists and the nurturing atmosphere of Mount Tremper Arts, which, being in the town of Shandaken, is smack dab in the middle of the Big Apple’s water supply. As the terrain nurtures the city, so MTA gives sustenance to NYC artists, Pokoik said.

“We’re looking at ‘Watershed Lab’ as a metaphor for programming,” he said. “There’s a symbiotic relationship between the city and the local community. Each Watershed Lab program is in partnership with a New York City theater or presenter. We’re an incubator, so artists work on new material here, and the showings are either premieres or works-in-progress that will eventually travel to New York and beyond.”

Food–especially food via sustainable local agriculture–is woven into MTA’s mission through its “Art-B-Q” events, where artists and their audiences share conversations over a meal harvested from and/or inspired by MTA’s extensive gardens. (Both meat and vegetarian menus are on offer, with meats sourced from local purveyors.)

The DarkMatter performance, on Saturday, July 16, will be one such event.

DarkMatter, the performance art duo Alok Vaid-Menon and Janani Balasubramanian, will share conversation with their audience over a meal culled from and/or inspired by MTA’s extensive gardens. Afterwards, DarkMatter will present their acclaimed #ItGetsBitter–“a hybrid mixture of art and activism, poetry and polemic, giggles and gasps”–and new work developed at Mount Tremper Arts this summer.

Vaid-Menon and Balasubramanian share stories of navigating the world in all of its ordinariness and peculiarity as trans South Asians, taking the audience on an emotional roller coaster from the personal to the political. They describe #ItGetsBitter as “a remix of spoken word, stand up comedy, fashion, and nursery rhymes.”

“DarkMatter is heartfelt and radical,” Pokoik said. “They’re exploring things I never could’ve imagined. I find myself bumping up against my own boundaries. But we are committed to keeping these fresh voices alive in a safe, welcoming space for both artist and audience.”

“Regarding race and gender, we’re at a fulcrum point in American history,” Pokoik said. “And DarkMatter just blows me away with their intelligence, fierceness, and ability to speak truth to power. They’re simultaneously confrontational, yet welcoming and accessible. They’re incredibly brave. We’re thrilled to have the be the first to start our Watershed Lab programs.”