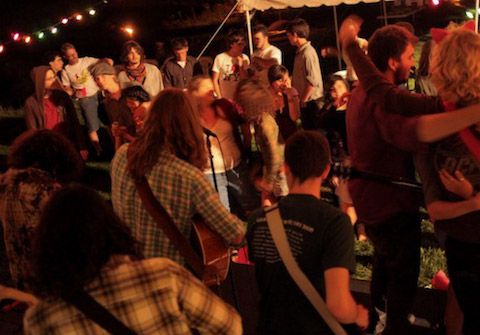 Above: The Anomalia Festival. Photo by Drew Harty.

The Anomalia Festival, which brings a diverse crowd of bands, artists and avant-garde art exhibits to the Delaware County town of Andes on Saturday, July 30, is a somewhat anarchic DIY event.

Back in 2009, when it was founded, it had a much more risqué name: Cockstock.

“It was a tongue-in-cheek pun about badminton,” said Alex Gohorel, the festival’s founder.

Gohorel lives in New York City, but his mother, Anne Gohorel, runs Bread Fellows, a bakery, on the family property near the border of Andes and Bovina on Route 28.

That’s where the festival, which Gohorel expects to draw over 100 people, happens today starting at noon.

Gohorel books the event himself. He’s been doing that kind of thing since high school, when he put on DIY punk shows and raves.

“Most of the performers are either friends of mine, or friends of friends,” he wrote in an email to the Watershed Post. “Almost all of them are based in NYC, where I live. I just send a lot of emails and hope people get back to me. I have had pretty good luck in booking these events.”

There is no particular genre of music, according to Gohorel. “In fact, I try to avoid making the music too homogeneous,” he said.

This year’s lineup of 15 acts includes “singer songwriters, a few bands, and a really wide variety of electronic music, from ambient to experimental hip hop to deep house, glitch, and beyond,” he said.

Then there’s the art, which is often interactive. One exhibit is a photo booth designed and programmed by Gohorel that takes a photo, then breaks it into pieces, producing what Gohorel calls “strange and unexpected results.”

There will also be a station where festival attendees can make their own giant painted cardboard heads, which will be put up onstage as the day goes on.

Above: A cardboard head that will appear at the Anomalia Festival. Photo via Alex Gohorel on Instagram.

An outbuilding on the property will become an art gallery for the day, hosting works from Ali Osborn, Kemeys Goethe, Zoraya Lua, David Engel and Gohorel that span photography, sculpture, illustration, graphic design and more.

The party goes all night—both day passes and camping passes are available. To buy them, click here.