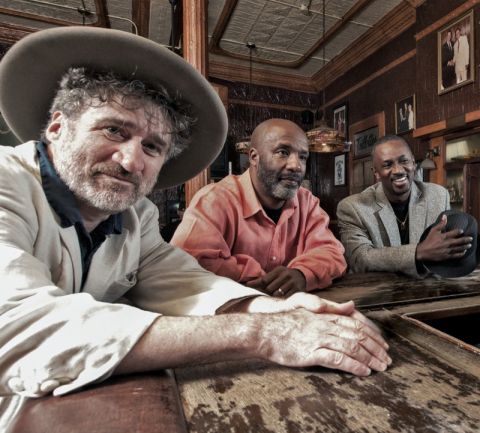 Above: Jon Cleary and the Monster Gentlemen. Photo via the West Kortright Centre.

When Jon Cleary and the Monster Gentlemen return to the West Kortright Center, you won’t be faulted for thinking you’ve been transported to the Big Easy.

“He played here in 2006,” West Kortright director Martha Van Burek said of the crown jewel of her season. “And he brought the house down. He was amazing. Been trying to get him back ever since.”

Appearing with Cleary at the West Kortright Center will be the uber funky rhythm section of drummer A.J. Hall and bassist Cornell C. Williams, aka the Monster Gentlemen. This duo is an integral aspect of Cleary’s recent album “Go Go Juice,” (his eighth), which netted him the 2016 Grammy (his first) for Best Regional Roots Music Album. In addition, OffBeat Magazine named him 2015 Artist of the Year, Songwriter of the Year, Best Keyboardist, and awarded his song “Boneyard” Song of the Year; and he was named New Orleans’s Big Easy Entertainer of the Year.

Looks like the world is catching up to Jon Cleary. The pianist-guitarist-singer is one-of-a-kind: UK-born ambassador of American music, revered in his adopted hometown of New Orleans (and the world at large) as a living link to such R&B piano icons as James Booker, Professor Longhair and Allen Toussaint. When asked if New Orleans natives ever prejudge him due to his foreignness, he said, “The only prejudice in New Orleans is against people who can’t play.”

To say Cleary can play is a gross understatement. Just ask Bonnie Raitt, in whose band he manned the keyboard for a decade; she called him “the 9th Wonder of the World.” He is a master, a channel of centuries-old tradition rooted in Africa, and filtered through the swampy multicultural streets of New Orleans; defiantly joyful music made by oft-oppressed citizens, the bedrock of everything from rock ’n’ roll to jazz to hip hop. He and the Monster Gentlemen bring all of that to the stage, turning any venue into a dance party--even a club in Austria.

When Watershed Post reached out to Cleary, he was in Diersbach, Austria, gigging with the Monster Gentlemen. Not exactly a soul mecca. No matter.

“Within five bars,” he said, “the place was jumping. We’re so fortunate there’s an audience for this music, and we take it wherever they want it.” (Before the West Kortright Center, the tour stopped in the Netherlands, Switzerland, the UK and Italy.)

Above: "Go Go Juice" by Jon Cleary and the Monster Gentlemen.

According to Cleary, New Orleans music never fails, no matter where he and the Monster Gentlemen perform. Have cell phones, the digital age, et al, changed how audiences react?

“No,” he said, laughing. “Not with our music. It does what it did 100 years ago. It presses all the right buttons.”

Cleary’s affable rasp is a dialect of its own: English, of course, but with a smoky, late-night Bourbon Street drawl, the result of over half his life spent in Louisiana, playing gigs. Makes you wonder: how did a London kid end up in New Orleans?

His musical family–especially a 45-loving uncle–played old school R&B in his childhood home, and Cleary just knew it was his destiny. At age 17, he hopped a Louisiana-bound plane and made a beeline for New Orleans’ famed bar-laundromat-gun shop the Maple Leaf.

“It took me about five seconds to realize I was home,” he said. Upstairs lived one of his heroes, legendary pianist-singer James Booker, and it turned out the place needed a new coat of paint. The venue hired Cleary for the paint job, and he soon found himself on the bandstand.

Cleary made a name as a stellar player and writer, and the rest is history. He steeped himself in the classic Crescent City keyboard canon–from Jelly Roll Morton to Fats Domino to Art Neville–incorporating all into his music, adding in 70s soul, gospel music, funk, Afro-Caribbean (and especially Afro-Cuban) rhythms and more. He calls it funk.

“Funk is the ethnic folk music of New Orleans,” he said. “The sound of the city I love.”