Above: The Cannonsville Dam, looking upstream toward the Cannonsville Reservoir. The dam’s release chamber is a rock structure surrounded by a road on the righthand side of the image. Muddy water began flowing into the West Branch of the Delaware River downstream of the release chamber on July 8. Photo via the NYC DEP.

After drilling caused a worrisome gush of muddy water downstream of the Cannonsville dam in Deposit on Wednesday, July 8, the New York City Department of Environmental Protection (DEP) is draining the Cannonsville Reservoir as a precaution while it makes repairs.

On July 8, contractors working for the DEP drilled several test borings into a rocky embankment about 50 yards south of the downstream base of the dam where a hydroelectric plant is slated to be built, according to DEP spokesman Adam Bosch and a series of press releases.

After a few holes were bored, the workers noticed that muddy water was flowing into the West Branch of the Delaware River downstream of the dam.

Above: Contractors drilling at the base of the Cannonsville Dam may have pierced an aquifer on July 8, causing muddy water to leak downstream, according to the DEP. Source: NYC DEP.

“We immediately went down and began to investigate,” Bosch said.

The DEP’s working guess is that the bore holes pierced an artesian aquifer — a layer of groundwater that is under pressure — which began sluicing water and sediment from the bore holes into the river.

Above: A rendering of the Cannonsville Dam and the boring incident. Source: NYC DEP.

The fear is that some of the sediment coming into the river may be coming from the dam itself.

This week, the DEP is drilling relief wells and plugging several newly-made bore holes to stop the flow of turbid discharge.

On Tuesday, July 21, contractors will drill a series of relief wells between the foot of the dam and the source of the muddy water in an attempt to depressurize the aquifer, Bosch said. Then they will plug the bore holes that seemed to cause the problem.

The Cannonsville dam, which is made of earth, clay and rocks, was built in 1964 and is considered one of the safest dams in New York City’s Catskills reservoir system, Bosch said.

Still, the DEP is taking no chances. While the agency investigates the source of the turbid discharge, it is draining much of the water from the reservoir, just in case.

“When it comes to usual conditions below dams, we do not mess around,” Bosch said.

Above: A rendering of the drilling incident that may have caused muddy discharge at the base of the Cannonsville Dam. Source: NYC DEP.

The DEP began draining the reservoir on Wednesday, July 15, diverting about 1.2 billion gallons per day down to the city’s drinking water supply and into the West Branch of the Delaware River. The reservoir’s water level is lowering at a rate of about 8 or 9 inches per day, Bosch said.

This is the second time in a decade that the DEP has emptied a reservoir because of safety concerns. After an inspection in 2005 showed that the Gilboa Dam in Schoharie County was in danger of failing, the agency drained the Schoharie Reservoir to allow for emergency repairs.

Since announcing the discovery of the mysterious muddy water at the Cannonsville Dam last week, the DEP has hosted a series of meetings in communities downstream of the dam to discuss the dam’s safety. Meetings have already been held in Deposit and Hancock, and are scheduled for Narrowsburg on Monday, July 20, for Matamoras, Pennsylvania on Tuesday, July 21, for Eaton, Pennsylvania on Wednesday, July 22 and another for Deposit on Thursday, July 23.

The DEP has also released maps that show which areas downstream from the Cannonsville Reservoir would be inundated if the dam failed. According to the maps, all of downtown Deposit and Hancock would be under water if the dam broke.

Above: The village of Deposit would be under water if the Cannonsville Dam broke, according to inundation maps released by the NYC DEP.

The water releases from the Cannonsville have an upside: Fishermen are delighted by the influx of unusually cold water into the Delaware River, which is perfect for trout.

The releases “keep the Main Stem cool for trout even in July,” according to fishing guide Tony Ritter, who reported in an email last week that both the Main Stem and the West Branch of the Delaware River are “at least a foot plus higher than normal,” and that the river has “stayed far below 68 degrees by the end of the day due to increased cold water bottom releases.”

“NYC has finally created a summer coldwater tailwater fishery without intending to do so,” Ritter wrote.

Below: Since the DEP began releasing water from the Cannonsville Dam on July 15, water downstream is much colder than normal, according to a graph of water temperatures in the Delaware River at Callicoon from the USGS. 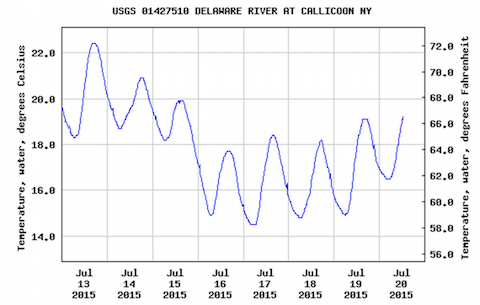 Go fish: Opening day for trout in the Catskills
Finding fish in the foodshed
Mysterious dead fish in Plattekill Creek