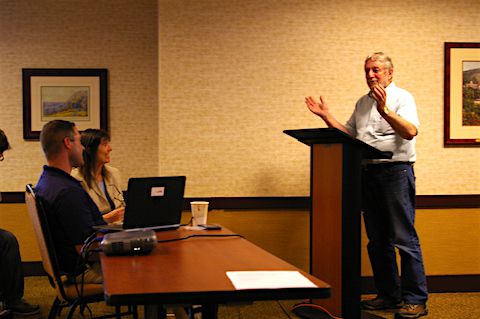 Above: Vernon Benjamin of the town of Saugerties addresses New York State Department of Health staffer Pamela Young and a colleague at a public forum on New York City's Filtration Avoidance Determination on June 29 in Hunter. Saugerties isn't in New York City's "west-of-Hudson" upstate watershed, Benjamin said, but rather is in its “east-of-west-of-Hudson-watershed.” Photos by Julia Reischel.

The second of two Catskills information sessions about New York City's Filtration Avoidance Determination (FAD), which is due to be renewed in May 2017, was a quiet affair held at the Kaatskill Mountain Club hotel in the Greene County town of Hunter on Wednesday, June 29.

A similar meeting in the Delaware County town of Delhi on June 21 was packed with rebellious comments from local officials upset with certain aspects of the agreement between New York City and its upstate watershed.

The FAD is a waiver, granted by the federal Environmental Protection Agency, which allows New York City to avoid filtering surface water from its watershed west of the Hudson River. Filtering is otherwise required for surface water sources such as reservoirs by the federal Clean Water Act, and the FAD allows the New York City Department of Environmental Protection (DEP) to avoid building a filtration plant that would cost billions.

New York City's FAD was issued in 1997 and is renewable every 10 years.

The bulk of the anger in Delhi last month was aimed at the city’s land acquisition program, which allows it to buy land in Catskills communities and permanently prevent it from being developed. Some Catskills officials are also disappointed with the city’s stream stabilization projects.

But in Hunter, in the eastern part of the Catskills watershed, only about 20 people attended a second forum where four people offered largely amicable comments.

Both forums were hosted by the New York State Department of Health (DOH), which oversees the FAD, and began with presentations by Pamela Young, a research scientist with the DOH.

During the public comment period at the forum in Hunter, Michael McCrary, the deputy supervisor of the Greene County town of Jewett, called for a “land swap” program that would allow land purchased by the DEP to be swapped for other land already owned by the agency.

Above: Michael McCrary of Jewett speaks at the forum in Hunter.

“Rather than having to purchase new land, a swap can come about,” McCrary said.

Such a land swap program would put the brakes on the DEP’s seemingly endless appetite for land in the Catskills, he said.

“Our major point is, no matter how wonderful you may be, an individual landowner is a better steward of the land than any government agency,” McCrary said.

Harold Goldberg, who serves on the village of Hunter’s planning board and also on the Greene County Planning Board, called on the agencies that govern the watershed to make city-owned land “more accessible with parking and signage,” he said.

Vernon Benjamin, the special operations coordinator for the town of Saugerties, spoke on behalf of a municipality which is located outside of New York City’s Catskills watershed.

Above: Michelle Yost, the watershed assistance program coordinator at the Greene County Soil and Water Conservation District, gives comments at the forum in Hunter.

Saying that Saugerties was in the “east-of-west-of-Hudson-watershed,” Benjamin acknowledged that the town is not a party to the Memorandum of Agreement (MOA) struck between NYC and upstate watershed towns in 1997.

But Saugerties is affected by the watershed’s policies, Benjamin said.

He said that during the flooding caused by Hurricane Irene in 2011, emergency discharges from the city’s Ashokan Reservoir caused erosion in Saugerties.

“We don’t want our own little MOA,” he said, “but we do see the collateral damage as worthy of attention.”

The DOH’s public forums about the FAD are the only publicly visible part of the FAD renegotiation process.

But the real action is happening behind the scenes, where representatives of the Coalition of Watershed Towns are wrangling with the DOH and the DEP over changes they want to see in the next FAD.

“There have been some gaps identified in the FAD program,” the DOH’s Pamela Young said in Hunter. She added that officials are in talks attempting to bridge them.

The outcome of those closed-door negotiations will appear when the DEP submits a draft version of its new FAD at the end of 2016. The draft will be released for public comment in February 2017, and is expected to be passed in May 2017, according to Young.