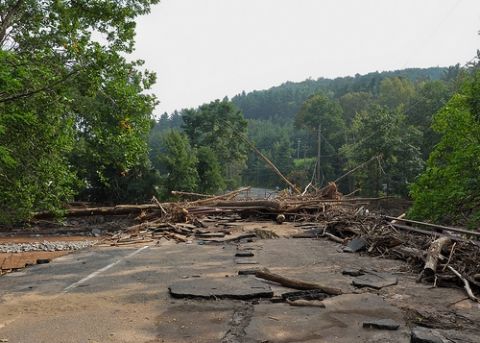 Above: Flood damage in Phoenicia caused by Tropical Storm Irene. Photo taken on September 4, 2011 by fixBufflao and posted to the Watershed Post Flickr pool.

Yesterday, the Federal Emergency Management Agency announced a plan to buy up to 33 properties in Ulster County that were "substantially damaged" by Tropical Storms Irene and Lee in 2011.

Through Ulster County, the property owners all applied for the voluntary program, called the Hazard Mitigation Grant Program. If and when the lands are purchased, all structures on them will be demolished and they will be maintained forever as open space, according to a FEMA press release.

The announcement about FEMA's plans in Ulster County is only the first step is the glacial buyout process, Ulster County Emergency Management director Art Snyder told mulitiple news outlets yesterday. Ulster County put together a proposal for federal buyouts of 38 properties back in February, and this announcement is just preliminary approval of the plan.

According to the Times Herald-Record, Snyder says that most of the homes on the list are in Shandaken:

Roughly 24 of those buyout-eligible homes are in Shandaken, Snyder said, while four are in Wawarsing, two are in Ulster, two are in the Town of Kingston, and one is in Olive.

But the feds haven't set aside the money yet to fund the project, Snyder told the Daily Freeman:

“We put in a budget for it, but they haven’t said what has been granted,” Snyder said. “They also haven’t said which properties they have accepted at this time. All they’ve done is release the public notice so that if anyone wanted to comment about the program, they would have an opportunity to do so.”

The Times Herald-Record reported that Snyder says the buyout "likely won't be complete until early 2014."

YNN interviewed a Kerhonkson resident, one of about 60 property owners who applied to the county for buyout assistance:

“There were actually some people that tried to stay and tried to rebuild, but of course, because of the money, they couldn’t afford it,” said [Kerhonkson resident] Wayne Depew ...“For the people who are down here, it’s going to be a welcomed thing for them because they were stuck[.]"

Ulster County isn't the only one considering FEMA buyouts. Counties and towns across the Catskills applied for the program back in February.

The public has 15 days to contact FEMA about the Ulster County plan. Read the full public announcement below.

Notification is hereby given to the public of the intent of the Federal Emergency Management Agency (FEMA) to provide Hazard Mitigation Assistance funding to Ulster County, New York.

The proposed activity is the voluntary acquisition and demolition of up to thirty-three (33) properties substantially damaged by flood waters from Hurricane Irene and/or Tropical Storm Lee in August and September 2011. The subject properties are in the Towns of Kingston, Olive, Shandaken, Ulster and Wawarsing. All are located within the base, or one percent annual chance floodplain (also known as the 100-year floodplain) of the Esopus Creek, Birch Creek, Stony Clove Creek, Rondout Creek, the Saw Kill and unnamed tributaries.

Acquisitions will be from willing sellers only. Properties will be acquired, structures demolished, and sites graded and seeded. Deed restrictions will prohibit future development and sites will be maintained in perpetuity as open space under municipal ownership.

Federal Executive Orders 11988, Floodplain Management, and 11990, Protection of Wetlands, require federal agencies to review proposed actions in floodplains and/or wetlands and explore practicable alternatives to avoid, minimize or mitigate potential impacts. The alternative to acquisition/demolition would be to leave these flood-prone properties in private ownership for the potential repair and rebuilding of structures or for future development. The proposed project will remove structures from the floodplain and create open space to restore the beneficial values served by floodplains and wetlands.

The public is invited to provide comments about this project. Written comments may be submitted by mail to FEMA Region II, Hazard Mitigation Grant Program, Leo O’Brien Federal Building, 11A Clinton Square, Room 742, Albany, New York 12206-5421 or by email to [email protected]. Comments should be submitted within 15 days of this notice.

Prattsville bridge over Schoharie Creek to be replaced

The Old Blenheim Bridge will lose its historic status

On the brink of a buyout, junkyard burns in Fleischmanns