Prattsville bridge over Schoharie Creek to be replaced 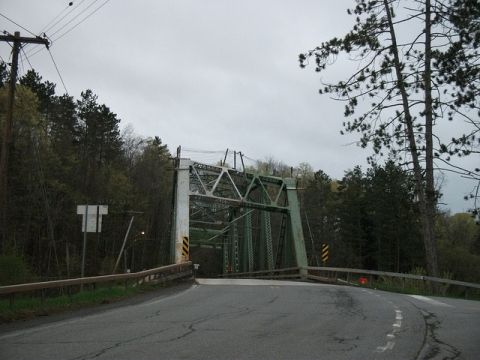 Above: The Route 23 bridge over the Schoharie Creek in Prattsville. Photo by Doug Kerr.

The steel truss bridge that carries Route 23 over the Schoharie Creek in the Greene County town of Prattsville is slated for replacement in 2016, according to the New York State Department of Transportation, which is holding a public meeting about the bridge on Thursday, Dec. 11 at the Prattsville Community Church at 6:30 p.m.

The bridge, which was built in 1927, has been repaired several times in the past decade, most recently in 2012 after workers found a crack in its steel, according to the Mountain Eagle.

After Prattsville and the bridge were inundated by floodwaters during Tropical Storm Irene in 2011, an engineering report found that the bridge may have contributed to the high floodwaters on Main Street.

Since then, Prattsville officials have been lobbying the DOT to replace the bridge entirely, according to the Daily Mail:

[T]own officials, in the spring of 2012, asked DOT to consider building a whole new structure, angling it so the creek waters would flow more smoothly during flood events. DOT was initially non-committal, pointing out Prattsville was not alone in getting hit by the flood and that there were as many as 110 bridges statewide requiring attention. But this past winter, Lopez said, “we won over the hearts and minds of DOT and [Governor Andrew Cuomo],” as Prattsville was pushed to the top portion of the list.

The DOT is now onboard; it wants to replace the entire structure with a new bridge in the same spot, according to Bryan Viggiani, a DOT spokesman.

"The idea would be to put something where the existing structure is, and then remove the old structure," he said. "That would impact traffic as minimally as possible."

The Prattsville bridge is one of 105 bridges across New York that will be repaired or replaced using $518 million in funds from FEMA's Hazard Mitigation Grant Program. The program aims to strengthen the state's bridges to withstand future natural disasters and floods.

Older bridges in flood zones are especially vulnerable to scour, the process of water and debris undermining a bridge's foundation, Viggiani said.

Another bridge in Prattsville, which carries Route 23A over Huntersfield Creek, is also slated for repairs under the program.

Other Catskills bridges that will be repaired or replaced using funding from the Hazard Mitigation Grant Program: