The Old Blenheim Bridge will lose its historic status 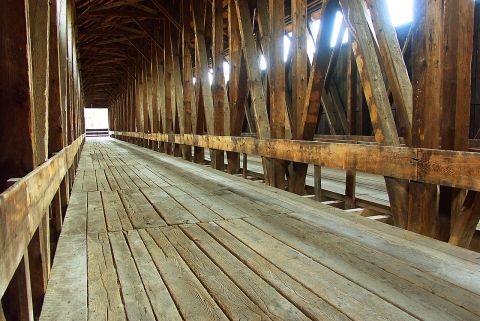 Above: The interior of the Blenheim Bridge in 2006, in a photo by Flickr user paraflyer. The bridge was washed away by floodwaters in 2011.

The Old Blenheim Bridge, which was the longest open-span covered bridge in the world before it was destroyed by Tropical Storm Irene in 2011, is being taken off the National Register of Historic Places, the Schoharie Times Journal reported this week.

The paper reported on Sept. 29 that the New York State Office of Parks, Recreation and Historic Preservation (SHPO) has begun the process of de-listing the site of the former landmark, in the Schoharie County town of Blenheim.

None of the bridge remains at the site; pieces of it were scattered far and wide during the flood, although some of its timbers have been recovered.

In 2012, after concerns that the bridge site would lose its historic status prompted dismayed outcry from locals, the head of the National Register of Historic Places promised to postpone the de-listing of the bridge "indefinitely."

But that reprieve is over, according to the paper, and it's the fault of New York's Office of Parks, Recreation and Historic Preservation, which recommended to the National Park Service that the bridge be stripped of its historic status:

Don Airey, of the Blenheim Long Term Community Recovery Committee, is not happy with the role of SHPO in the process.

He has no problem with the National Park Service, but noted that that office was contacted by SHPO opening the de-listing process.

"SHPO has been counter-productive to say the least and unsupportive" in efforts to collect pieces of the old span as well as in appeals to FEMA for funding. The state agency should at least have stayed neutral instead of pushing for de-listing, he added.

Preservationists have secured some funding to build a gazebo on the site of the former bridge from the Federal Emergency Management Agency (FEMA), but their hopes to raise enough money to build a replacement bridge have not been realized.