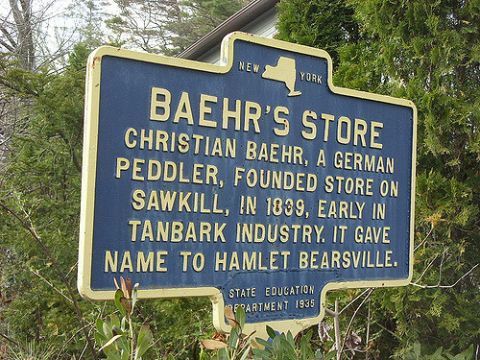 Above: A historical sign in the Ulster County hamlet of Bearsville. Photo by Doug Kerr, via Flickr.

“History is good,” said Michael Drillinger, the coordinator of the Maurice Hinchey Catskill Interpretive Center in the Ulster County hamlet of Mount Tremper. He was speaking of the upcoming Catskill History Conclave at the CIC, which will be held this Saturday, April 30.

“Woodstock town historian Richard Heppner observed there’d never been a gathering of all the local historians,” Drillinger said. “He thought it would be instructive and stimulating to get everyone together.”

Organized by Drillinger, Heppne and Woodstock Arts publisher Weston Blelock, the conclave will offer an opportunity for archivists, historians, representatives of historical societies, folklorists and anyone interested in the richness of times gone by in the Catskills to share notes, network and discuss how best to approach the future of the past.

Keynote speaker Bob Steuding, the author of “The Heart of the Catskills” and several other noted volumes, is looking forward to sharing experiences garnered from writing about the Catskills for 50 years.

Steuding is hoping that the conclave will result in an association of Catskill historians.

“People have different ways of preserving and archiving,” he said. “Having an organization could help people share resources, and make it easier.”

The challenges of the historian are many. For local historians in particular, physically preserving the past can be expensive; scans, temperature-controlled vaults and other preservation tools are pricey. And as a rule, historical societies and individuals are grossly underfunded (if at all). Officers themselves are most often volunteers, dependent on grants and patrons.

Additionally, the task of passing on knowledge to the younger generation can be daunting. Steuding, for one, would like to see more Catskill history taught in local schools. Although students have more access to information than any other generation in history, most know very little about the very ground on which they walk.

“There’s always a threat to preserving folk tradition,” Steuding said. But he is optimistic, and he expects these factors, among others, to be addressed at the conclave.

Drillinger is eager to see everyone under one roof.

“These individuals have a common thread,” he said. “[At the conclave], historians who work in their own bubble can meet colleagues, and they can explore ways to work together, pool resources and help one another.”

All hope the conference will serve as a stepping stone toward future initiatives through which, as a unified force, historians can better advocate for the resources and assistance they need to effectively preserve and promote the history of the Catskills.

Ray LaFever, the Region 4 coordinator of the Association of Public Historians of New York State and the official historian of the Delaware County town of Bovina will speak.