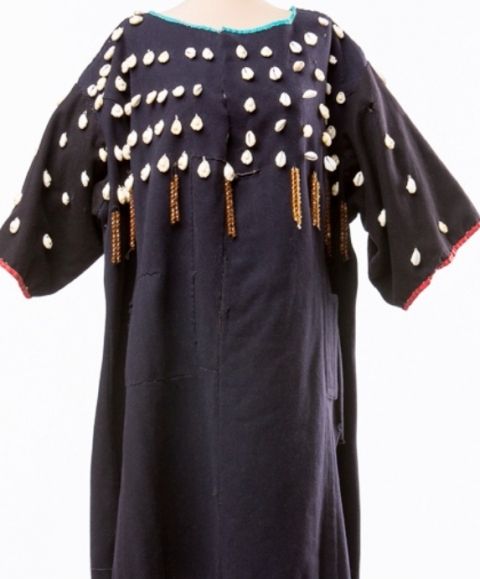 Above: A tribal dress that is believed to be made from the coats of Union soldiers who fell at the Battle of Little Bighorn. Photo courtesy of Delaware County resident Cliff Eaglefeathers, who rediscovered the artifact.

This weekend, June 24, 25 and 26, marks the 140th anniversary of the Battle of Little Big Horn, also known as “Custer’s Last Stand,” a crucial victory for Lakota and Cheyenne against invading U. S. Army Forces in Montana. In ceremonies to be held at the Little Bighorn Battlefield National Monument, in Crow Agency, Montana, Bloomville resident Cliff Eaglefeathers will play a special role.

Eaglefeathers, a full-blooded Northern Cheyenne and a teacher of Native American Studies at SUNY Empire State College in Saratoga, will present a rare artifact to tribal elders: a tribal dress made from the coats of Union soldiers who fell at the Battle of Little Bighorn. The dress will spend the summer at the National Monument, then return to the Northwest Museum of Arts & Culture in Spokane, Washington.

Eaglefeathers, 68, is credited with rediscovering the dress, doggedly pursuing it and retrieving it from the Northwest Museum’s basement. He’d originally seen it in 1989, in a different Spokane museum, while he and his wife, the late Karyl Hunt Eaglefeathers, also a Bloomville teacher, were out west for a conference.

Above: Cliff Eaglefeathers. Image via a video about the dress on the SUNY Empire State College website.

“I walked by this dress,” Eaglefeathers said of that 1989 moment, “and I kept looking at it for over an hour. The brass plate said, ‘This Dress Made from Army Coats from Little Bighorn Battle.’ I couldn’t believe it.”

According to the tradition of the pre-Colonial era, some Native Americans gathered trophies from their fallen foes. As the plate indicated, this is the very likely provenance of the dress, which Eaglefeathers says is in amazing shape.

“It’s two shades of blue,” he says. “A historian says that makes it authentic, because officers wore a different shade. It’s very exciting to touch it.”

What makes the dress even more rare is the Red Fork Battle, also known as the Dull Knife Fight, which happened in the Wyoming territory five months after Little Bighorn. At this conflict between Cheyenne and the U.S, Army, the natives were defeated and Union soldiers destroyed battlefield trophies, many from Little Bighorn.

“Saddlebags, bugles, rifles, even a necklace of eight enemy fingers,” said Eaglefeathers. “The army burnt it all.” But the dress mysteriously survived.

Eaglefeathers’ great, great, great grandfather, Morning Star, had come to Little Bighorn a few days after Custer’s Last Stand. Like most Cheyenne of the time, he was later forcibly relocated to Oklahoma, along with thousands of Native Americans. The Northern Cheyenne in particular loathed their new surroundings, and, in 1878, Morning Star escaped back to Montana. A century later, his great, great, great, grandson, Cliff, would feel a strong connection to an artifact in a museum.

After first seeing it in 1989, Eaglefeathers couldn’t stop thinking about the dress. Almost two decades passed, during which time he and Karyl Hunt Eaglefeathers made a life in Delaware County.

“When Karyl and I returned to Spokane for a visit in ’07,” Eaglefeathers said, “I said, ‘Let’s go see that dress.’ But the museum was gone. Everything had been relocated to Northwest Museum of Arts & Culture. But at first, they said they’d never heard of the dress.”

It turned out most Native Americans also hadn’t heard of the dress (or so they said), including tribal elders and employees at the new museum. But Eaglefeathers said that this isn’t unusual, as Cheyenne elders had imposed a “100-year silence” on discussing anything related to Little Bighorn. After the subsequent brutal colonization of the west, fear of government reprisals remained strong.

Still, Eaglefeathers knew what he saw, and he persisted. Finally, an elder knew exactly what he was talking about. She led him to the crate in the basement of the museum, and there it was: the dress.

“An Indian named Margaret Horn had sold it to the museum,” Eagelfeathers said. “Where she got it, we don’t know. There’s a story in the oral tradition of a Cheyenne woman being forcibly taken with others by wagon to Fort Robinson after the Red Fork Battle in 1876, after all the other trophies had been burned. It was the dead of winter, snow was everywhere, and she dropped a bundle from the wagon. She was very upset. She risked her life to jump from the wagon and get that bundle.”

Eaglefeathers said he thinks the dress was in the bundle, and it was passed down through families for decades until Margaret Horn sold it to the museum for safekeeping.

A representative from the Northwest Museum of Arts & Culture will meet Eaglefeathers at Little Bighorn, and he will present the dress to elders before it is put on display for the summer.

After his return, Eaglefeathers will once again co-teach Living History: Little Bighorn from a Cheyenne Perspective at Empire State College. The course is available both online and in Saratoga Springs. The dress is part of the curriculum.