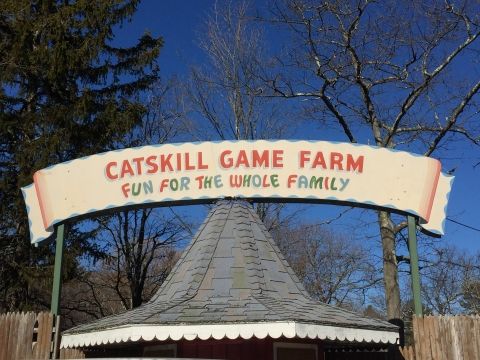 When Cathy and Ben Ballone bought the shuttered Catskill Game Farm in 2012, they hoped to breathe new life into the historic former private zoo.

Instead, they have spent four years unsuccessfully seeking millions of dollars from investors to rehabilitate the property as an RV park and camping destination.

In its heyday, the Catskill Game Farm housed thousands of animals, including monkeys, giraffes, rhinoceroses and an elephant, on its 206-acre campus in the Greene County town of Catskill. Founded in 1933 by Roland Lindemann, the zoo was a beloved local attraction for generations of Catskills tourists for 73 years. In 2006, the zoo was shuttered and the animals were sold off.

In 2012, the Ballones were looking to buy land in the Durham area, near where Cathy grew up. Cathy, an events planner, and Ben, a contractor from New Jersey, were captivated by the former Catskill Game Farm, which had sat vacant since 2006. They bought it for $100,000 and renamed it the Old Game Farm.

“We purchased it because we thought we would regret it later if we didn’t,” Cathy Ballone said. “We both were enthralled with the rich history of the property.”

The couple had big plans. They began renting out portions of the farm’s facilities to the owners of horses and peacocks. They also brought their own animals: their two dogs, Grady and Hudson, their cat, Steve, and herd of goats.

But the Ballones didn’t want to turn the property back into a zoo. Instead, they hoped to preserve the zoo’s unique history in a family friendly event venue and camping destination.

Above: Cathy Ballone at the Old Game Farm in January 2016. Photo by Jessica Porter.

After they purchased the property, they began looking for partners to invest $2 million to help them build a campground and RV park that would include equine camping, seasonal RV spots and tent sites. They also hoped to build a museum to showcase the history of the zoo.

Four years later, the Ballones are reconsidering their plan. They have not found an investor who is willing to put millions into the property.

The couple is now seeking a $500,000 investment to renovate the former zoo’s giraffe barn into an inn that would have the ability to hold weddings or other events.

“There are so many people wanting to get married in a unique location with accommodations on site,” said Cathy Ballone, who runs her own events planning business, Cathy's Elegant Events.

The inn would include five guest rooms, a commercial kitchen, a dining room and a living room. The rooms would showcase the building’s past: the living and dining rooms were once the zoo’s the giraffe stalls, and many of the guest rooms once housed monkeys and lemurs.

The Ballones have also appealed to the community to help raise funds, which they earmark for making the grounds safe for foot tours. They have created a GoFundMe page and have opened the property for tours by appointment with a request that any visitors make a donation. So far, through these efforts, they have raised $8,000.

That’s a far cry from what’s necessary to improve the 206 acres of grounds on the property. Along the roads, there are hundreds of poles that were sawed off about six inches from the ground which need to be dug up to prevent tripping hazards, Cathy Ballone said. A bathroom needs to be installed. A few of the property’s more than 100 buildings need to be renovated. Holes need to be filled in with dirt.

If they cannot raise the capital they need, the Ballones may give up on their plans for the Catskill Game Farm entirely. Without support from an investor, Cathy Ballone said, their vision may fall apart and they may have to sell the property.