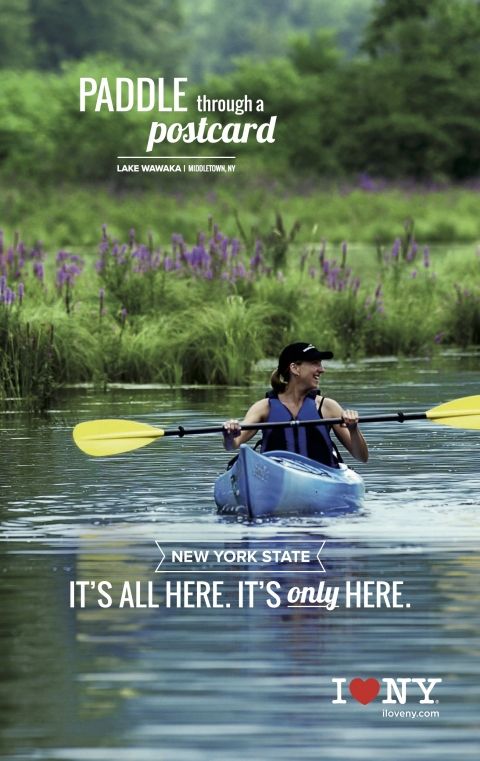 Above: A poster promoting Lake Wawaka in the Delaware County hamlet of Halcottsville, one of six ads that will promote the Catskills region in the NYC public transit system this summer. To see all six posters, click here.

Gov. Andrew Cuomo pulled out all the stops to promote the Catskills region this week. As his staff bombarded social media with a media blitz about the charms of the Catskills region, the governor spent a day hitting Catskills tourism hotspots, at one point appearing with movie star Robert De Niro at the Bethel Woods Center for the Arts in Sullivan County, the site of the 1969 Woodstock Festival.

De Niro, who owns 78 acres in the Ulster County town of Gardiner, cracked Borscht-Belt-style jokes while extolling his love of the Catskills.

“I wanted to change my name from Robert De Niro to Rugelach De Goldfarb De Niro Steinberg, and spend the summers in the Catskills telling jokes,” De Niro said, according to the Times Herald-Record.

“If there is a region of the state that has more potential for tourism activity, it is the Catskills,” Cuomo said, according to a transcript of his remarks issued by his office. “Mr. De Niro and I were talking on the way up, it is still basically a secret for generations of New Yorkers.”

Above: Actor Robert De Niro, who has a home in Ulster County, delivers one-liners at the Bethel Woods Center for the Arts on June 30 as part of the Catskills Challenge. Photo via the Gov. Andrew Cuomo Flickr page.

On Wednesday, June 29, Cuomo was scheduled to take a “Ride the Catskills” motorcycle ride from Windham to Roscoe, stopping at Woodstock Harley-Davidson and Belleayre Mountain Ski Center along the way. But, according to the Catskill Mountain News, Cuomo himself wasn't in the convoy of bikers that made the trip.

On Thursday, June 30, the governor did show up at the “Catskills Challenge,” a day of activities modeled after a similar event his administration launched in the Adirondacks three years ago.

The Catskills Challenge began with the appearance with Robert De Niro in Bethel and ended with the governor racing state legislators in rafts on the Delaware River. (Naturally, the governor won, according to the Times Herald-Record.)

It’s the second time in a year that Gov. Cuomo has visited the Catskills to promote tourism in the region. Last October, he rode his motorcycle to the Maurice D. Hinchey Catskill Interpretive Center in Mount Tremper to attend an event that was closed to the public.

In the midst of all the hoopla this week, the governor debuted a new $5 million ad campaign promoting the Catskills that will run in New York City and up and down the East Coast this summer.

The subway ads feature Bethel Woods Center for the Arts in Bethel; Lake Wawaka in Middletown; Zoom Flume in East Durham; OPUS 40 in Saugerties; the Roscoe Company in Roscoe; and Hanford Mills Museum in East Meredith.

Above: A subway poster for the Roscoe Beer Co. in the Sullivan County town of Roscoe, one of six ads that will promote the Catskills region in the NYC public transit system this summer. To see all six posters, click here.

The television ad promotes Hunter Mountain’s Zipline Tour; the Birthplace of American Fly Fishing in Roscoe; the World’s Largest Kaleidoscope in Mount Tremper; Bethel Woods Center for the Arts; and Rocking Horse Ranch in Highland. To see all the ads, see the top of this story or click here. Click here to see the TV commercial promoting the Catskills.

Above: A television ad promoting the Catskills that will air this summer on east coast TV stations. Via Gov. Andrew Cuomo's office.

Cuomo used the Catskills Challenge yesterday to announce that the state will nominate Bethel Woods and the historic Woodstock Festival grounds to the State and National Registers of Historic Places.

He also used the occasion to take credit for a slew of various grants that are coming to the Catskills this year, which include $223,000 in Smart Growth Implementation Grants, 500,000 in Local Assistance grants and improvements to various campgrounds. For a breakdown of the grant money, see the bottom of this article.

Robert De Niro is conjuring the legacy — and the stand-up jokes — of comedians like Rodney Dangerfield, Henny Youngman and Milton Berle while praising the natural beauty of New York's Catskills region.

Cuomo’s media team put together a highlight reel of Catskills Challenge events, which you can see below:

Grant money coming to the Catskills, according to Gov. Andrew Cuomo's office

There will also be $500,000 in Local Assistance grants coming to the Catskills:

Belleayre Music Festival returns this weekend after year off