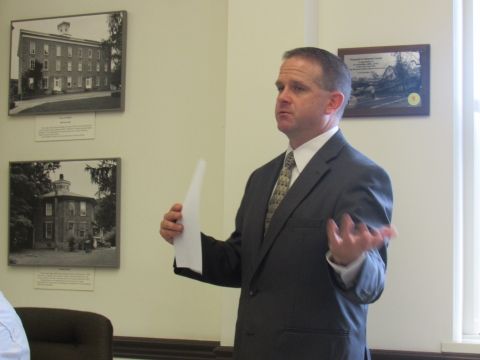 Above: Delaware County Economic Development Director Glenn Nealis, pictured here at an October county board meeting, is one of the seven members of the new Delaware County Tourism Advisory Board. Photo by Robert Cairns.

As outlined in the new law authorizing the two percent tax on overnight stays, the advisory board is comprised of the county's economic development director, two members of the board of supervisors and four representatives of the tourism industry. The law also provides that at least two of the industry representatives must be from lodging businesses.

As is typical of advisory committee appointments, board Chairman James Eisel made the appointments without a vote of the board. There was no discussion of the issue.

Economic Development Director Glenn Nealis was appointed to a three-year term, as was Teresa Allen, the co-chair of the Upper Delaware Business Coalition.

Stamford Supervisor Mike Triolo and Robert Nash of the Colonial Motel in Grand Gorge were appointed to two-year terms.

Colchester Supervisor Art Merrill, Leland Ploutz of the Octagon Motor Lodge in Hamden and Liz Callahan, the executive director of Hanford Mills Museum in East Meredith, were appointed to one-year terms. Ploutz was a vocal opponent of the bed tax at public hearings about the issue last year.

The board of supervisors adopted the hotel and motel occupancy tax on Nov. 24, 2015 after a series of public meetings and public hearings. The tax was opposed by several operators of motels and bed-and-breakfast establishments who claimed it placed an undue burden on them.

County leaders said that the tax was needed to fund tourism promotion and compete with neighboring counties that spend many times more money on tourism.

Proponents of the bed tax law say that the tax will raise $192,000 per year to augment the county's tourism promotion efforts.

Currently, the county spends $95,000 annually through its tourism promotion agency, the Delaware County Chamber of Commerce.

The bed tax’s implementation, which began on March 1, has been criticized as slapdash by some business owners and several newly-elected local officials, including Pat Davis, the supervisor of the town of Middletown, and Bud Gladstone, the supervisor of Andes, according to the Catskill Mountain News.