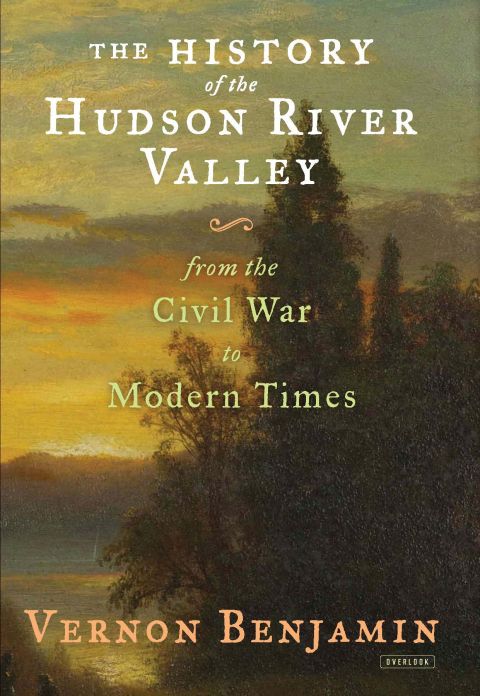 Above: Vernon Benjamin's history of the Hudson Valley.

“I think one cannot divide the Hudson Valley from the Catskills in a historic account, and I try to keep that theme alive in small ways,” said Vernon Benjamin, the author of the voluminous new book “The History of the Hudson River Valley: From the Civil War to Modern Times,” which came out last month.

Benjamin is giving a talk and signing copies of his 625-page account of the last century-and-a-half of Hudson Valley history tonight, Thursday, September 29, at 6:30 p.m. at the Hunter Public Library.

The fact that Benjamin is touring with his book in the mountaintop communities of Greene County shows that he is serious about including the Catskills in his sweeping view of local history.

This is a great corrective: All too often, the Catskills region gets lumped into the Hudson Valley region, despite the fact that the two regions are wildly different.

The cold, wild Catskills are full of mountain people, isolated in small villages and always scrambling to eke a living from the rocky ground, while the Hudson Valley boasts larger, comparatively more wealthy riverfront communities that are fat from centuries of cultural and commercial trade with the outside world.

But Vernon says that the mountains and the valley are intimately related. His new book is the sequel to his first history of the region, “The History of the Hudson River Valley: From Wilderness to the Civil War,” and it is the result of decades of research. He knows his stuff.

Vernon's new book is full of historical anecdotes that are more mountain than valley. John Burroughs, the 19th-century naturalist-laureate of the Catskills, appears almost as often as the Roosevelts, with his very own chapter. The book ends with an epilogue depicting the epic burning of the Catskill Mountain House, which was torched by the New York State Department of Environmental Conservation in 1963.

The Catskills were, along with the Hudson Valley, the birthplace of the American version of romanticism, Benjamin argues, with both regions regarded as “beauty’s American fountainhead.”

The Greene County village of Palenville is thought to be America’s “earliest art colony,” he writes; in the post-Civil-War years, the “hardscrabble community on the edge of the wilderness” bloomed with boardinghouses and resorts housing artists and pleasure seekers, drawn by the marvels of Kaaterskill Clove.

Benjamin is particularly insightful about the painful history of the Catskills’ colonization by New York City’s water system. In his chapter on the subject, “The Takings,” he begins by drawing a metaphorical parallel between an Indian Catskills creation myth and the modern story of the city’s destruction of Catskills communities to make way for its water supply:

An old Indian myth about the origin of the Catskill Mountains told of a giant monster that had drunk dry the Great Lakes and, still thirsty, was heading toward the Atlantic Ocean when Manitou, exasperated at the creature’s fall, rose up and struck it dead. The Catskills formed where the monster fell, North and South lakes representing its eyes . . . This was the old Indian myth. A new one might instead have the monster slouching from the south, this time to drink dry not the ocean but the great water resources that Manitou held in its benevolent Catskills palm, only now no god arose to strike the monster dead.

Benjamin is no stranger to the water wars of the Catskills. He serves on the Ashokan Release Working Group, which represents communities located on the Lower Esopus Creek, downstream of the city’s Ashokan Reservoir in Ulster County. His view of the history of the region is a loving and informed one, and it’s well worth reading.

As Benjamin says in his preface, more than 25 books have been published about the Hudson River, but his is the only one that “treats the entire Valley’s history in a single, comprehensive, narrative and critical fashion.” With that kind of approach, it becomes obvious that the Catskills are an integral part of the valley's history.