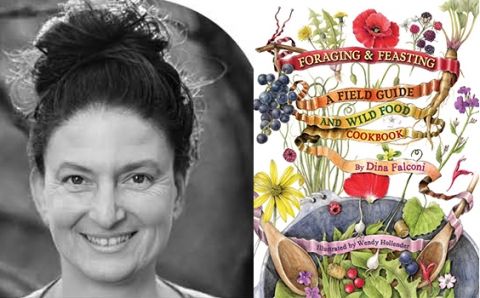 For three decades, Dina Falconi has been living and working on the edge where wellness meets ecological awareness: teaching, creating medicinal tinctures and herbal skin care products, and cooking up a storm. Central to much of her work is the fine art of gathering up the medicines and nutrients and flavors that are there for the taking, and rediscovering the value in indigenous plants oft dissed and dismissed as “weeds.”

Falconi dreamed for years of a really good book that would synthesize the skills of plant identification and kitchen wizardry, teaching people not just what to gather but how to integrate the finds into their everyday lives for delicious good health. She found a kindred spirit and powerful ally in botanical illustrator Wendy Hollender, and the two began creating in 2009.

When Falconi and Hollender established a Kickstarter campaign to cover publishing costs last winter, they aimed low and asked for $25,000, knowing that if the goal wasn’t reached they’d get no money at all, but also aware that they actually needed more like $60,000 to get the book done. The results vindicated Falconi’s belief that the time was right for a comprehensive guide like this: Eager readers pre-purchased nearly 3,000 copies, totaling $115,026 over the 45-day campaign.

Last summer, supporters received their reward: Foraging and Feasting: A Field Guide and Wild Food Cookbook. It’s a gloriously colorful, user-friendly hardback that feels good in your hands and sets your culinary imagination dancing. This month, you can go meet Falconi and Hollender in person, taste some forage-infused yummies, and get a signed copy on two occasions: at Morgan Outdoors in Livingston Manor on Saturday, Nov. 23, or at The Golden Notebook in Woodstock on Saturday, Nov. 30.

The Watershed Post caught up with Falconi in her kitchen, adding wild herbs to her homemade truffles.

Watershed Post: So, the Kickstarter certainly worked out. How’s it going since?

Dina Falconi: Really well. It’s nice to see it being received the way I envisioned and then some. People get why I created this book; being in this world for so many years, I could see what was missing and it fills that niche. Hopefully it becomes a classic. It feels like it has that quality, like it has longevity.

As publishers, we’re handling all our own promotions, and it’s a lot to learn, but we love being at events and direct selling, partnering with bookstores and festivals. We’re one of the things happening at a big splashy opening of a foodie place in Manhattan [Chef Jean-Georges' ABC Kitchen]. We’ve got 40 wholesale accounts, places like Powell’s Books and Rizzoli’s in Manhattan, and we’re in bookstores all over the Hudson Valley. We’re also doing well in gift shops and kitchen places like BlueCashew in Rhinebeck. Our calendar for the next two months is packed. Yeah, it’s exciting!

DF: We knew it would appeal to the 21- to 40-year-old eco-foodies. What’s been lovely is seeing how much it appeals to older folks who relate to this as traditional wisdom. It’s so much fun seeing who likes it. Seven-year-olds who grab it and run out looking for the plants that match the pictures. Eighty-year-olds. A woman in her 40s saying she’s buying it for her father-in-law, and then the next one saying she’s buying it for her son. It’s a blast.

We knew the knowledge had value and the presentation would be top-notch. Still, there’s that moment right before pushing that Kickstarter “send” button: Are people gonna like this? Have I been on a fool’s errand? It’s such a heartfelt project, with so much of us in it. I had confidence that we’d be filling a gap, but I’m a perfectionist. In order for the project to serve and speak as I envisioned it, there were a lot of moving parts and pieces to put together...Caring so much made it scary.

Having it well received in serious places like the Adirondack Museum and the Botanical Gardens, that’s helped -- the feeling of adding to and codifying an important heritage and tradition.

Left: Detail from one of Hollender's illustrated pages in Foraging and Feasting.

WP: Why do you think it’s such a hit?

DF: I think it’s the experience of sensual contact- a celebration of the magnetic quality of the plant kingdom and good food. If you don’t get in the way, the plants speak. Wendy’s illustrations do a lot of that, clear and delicious and beautiful.

We have so much fun at events. We bring samples and people get this burst of strong, distinct, poignant flavors that you don’t taste every day -- their expressions are pretty ecstatic, it’s great to watch. After they fall in love is when I explain the nutrition piece. People are falling in love with dandelions and burdocks, buying prints for their walls of things that they used to try to eradicate. We’re pushing the culinary envelope. Pretty subversive, actually.

For more about Foraging and Feasting, visit the book's website, foragingandfeasting.com.

Correction: An earlier draft of this story stated that readers pre-purchased over 4,000 copies of the book. The number is closer to 3,000, Falconi informs us.

Below: Dina Falconi and Wendy Hollender discuss the art of cooking with wild edibles, and the making of Foraging and Feasting, in a YouTube video clip.