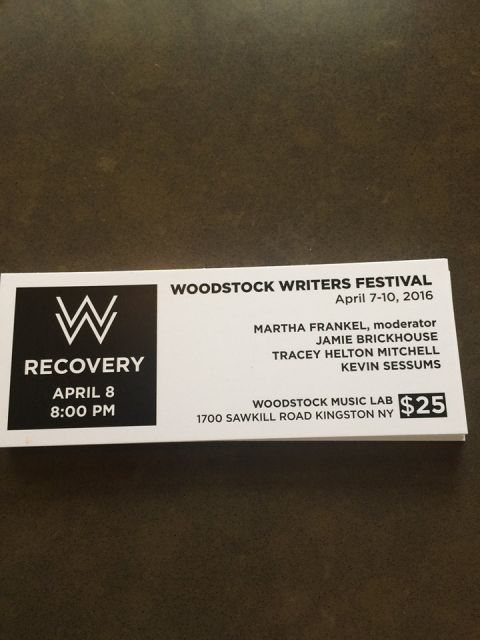 Editor’s note: Robert Burke Warren, the author of the new novel “Perfectly Broken,” will be speaking about his new book on the fiction panel of the 2016 Woodstock Writers Festival at 2 p.m. on April 9. His wife, Holly George-Warren, a rock biographer, is speaking on the music panel at 4 p.m. on April 9. We’ve asked Robert to preview the festival for us.

The Woodstock Writers Festival, which runs for four days beginning on Thursday, April 7, continues to grow, defying naysayers’ claims that books are going the way of the dodo. Clearly, in Woodstock at least, books are doing fine, thank you.

Now in its seventh year, the festival, a mecca for authors, readers, and book fans of all stripes, will be the biggest yet, according to executive director Martha Frankel, who is booking bigger rooms to accommodate demand.

“I was worried about the amount of people in the Kleinert-James,” Frankel said of 2015’s packed-to-the-rafters events at the art gallery in the center of Woodstock. “So we’ve moved some things to the Woodstock Music Lab. That’s the biggest difference between this festival and the last six. I like people to eat and shop in town, so we’ll still have plenty of events there, but we just needed more space.”

The Woodstock Music Lab, located in the former Zena Elementary School building on the Kingston/Woodstock border, will host the famed Thursday night Story Slam, the traditional festival kickoff. This year, in tribute to the late David Bowie, entrants will read an original, three-minute story containing the sentence, “We can be heroes, just for one day,” a quote from Bowie’s 1977 hit ”Heroes.”

On Saturday, the venue will offer a keynote from acclaimed New York Times bestselling author Nancy Jo Sales, whose “American Girls: Social Media and the Secret Lives of Teenagers,” is getting a lot of attention.

“Her book is fascinating, frightening, and fabulous,” said Frankel.

As with every Woodstock Writers Festival, acclaimed authors and publishing pros will set up in homes and studios to offer intimate workshops–aka intensives–in everything from memoir to fiction, and editing to social media strategies, and more. Several intensives have already sold out.

For Frankel, the centerpiece of the festival will be “Recovery: Writing with Hope in Your Pen,” a panel scheduled for Friday, April 8 at 8 p.m at the at the Woodstock Music Lab. For this panel, Frankel will moderate a dialogue with fellow writers Jamie Brickhouse, Kevin Sessums and Tracey Helton Mitchell; all will tell stories of their recovery from addiction, and explore the ways they’ve learned to move forward.

Frankel, herself in recovery, is so passionate about the issue that she’s giving away many, many passes. She wants to pack the room, particularly with kids, she said.

“Like a lot of people, I’m very freaked out by the access local kids have to heroin, and about the deaths,” she said of the recent opiate epidemic ravaging the country and in the Hudson Valley and Catskills.

“I’ve wanted to do something about recovery, as opposed to addiction, for a long time,” she said. “There is hope, and there’s no shame in addiction or recovery. I’m around addicts every day. Recovery can happen.”

“Some people are upset with him,” Frankel said, referring to Hoskyns' alleged portrayal of local giants like Albert Grossman, Levon Helm and John Sebastian in occasionally unfavorable light. “It will be interesting to see who shows up.”

Indeed. No Woodstock Writers Festival has ever been accused of being uneventful, and no doubt the seventh annual will keep that tradition alive.