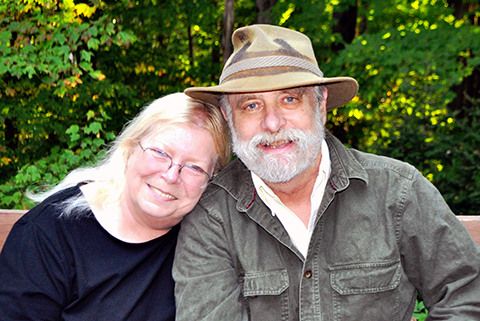 Above: Johanna and Robert Titus, local Ice Age experts and authors. Photo courtesy of the Tituses.

The craggy, jaggy landscapes we know and love as the Catskills have been inspiring the athletic and artistic for centuries. But did you ever wonder how they got that way, and what they were like before? Come down to Yesterdays’ News at the Roxbury Corner Store on Saturday and find out what shaped your favorite stretch of creek bed.

Robert and Johanna Titus, experts on the Ice Age glaciers that were instrumental in the formation of the mountains and valleys of the region, will speak about the geological history of the Catskill Mountains and Hudson Valley and how the most recent ice age, 12,000 years ago, was critical in the development of the topography of the region. Their lecture will be followed by a reception and book signing.

Robert, a paleontologist and Hartwick College professor, has published several books on the geology of our region. He and Johanna, whose MS is in molecular biology (“She’s the mastodon expert,” Robert says), published The Hudson Valley in the Ice Age late last year and have been touring ever since, enlightening folks about the deep history of the very ground we scramble around on. The Tituses write regularly for Kaatskill Life magazine, the Columbia-Greene Media newspaper chain and the Woodstock Times.

The Watershed Post talked with Robert and Johanna about the giant living sculpture we inhabit.

Watershed Post: So what was going on 12,000 years ago that made all this?

Robert Titus: The great valleys were filled with ice. The big valleys -- Schoharie, Susquehanna, Delaware -- were filled with individual valley glaciers. When the ice advanced, it eroded the valleys; when it retreated, those were dammed in some places and melt water filled them and made the lakes, Lake Schoharie and Albany.

Johanna Titus: In some places, when the glaciers melted, great thundering streams of melt water carved out cloves, like Grand Gorge and Kaaterskill.

WP: Now that I think about it, would there be any other way to make a clove?

JT: Not really. This is probably the best way.

RT: We see how steep the walls are and imagine some kind of buzz-saw-like effect had to create those sharp angles. No. Intense erosion.

WP: That must have been something to see.

JT: It must have! Wouldn’t we like to go back and look and listen? Hurricane Irene did a pretty good job as reenactments go, on a smaller scale.

RT: As writers, we take the liberty of going back imaginatively: Poetic license. We’ll take you there.

JT: People rarely look at Hudson River School paintings and see the glaciers and the Ice Age. But had it not been for the one, we wouldn’t have the other.

WP: So what are some of the glacial reminders we see when we’re out hiking?

RT: They’re easy to spot; they’re some of the most noticeable features. The big boulders are glacial; the erratic steep spillways are glacial.

JT: Sometimes you see scratches and striations in stone. Those are caused by boulders being dragged.

WP: So on Saturday, you’re going to be focusing on the features right around Roxbury?

We have a video coming out later this year, touring the Vanderbilt and Roosevelt national parks and describing them during the Ice Age. The whole landscape’s been affected one way or another by the Ice Age. It’s stunning to picture the Hudson Valley filled up to the top.

Book signing and talk with Robert and Johanna Titus. Yesterday’s News, located at the Roxbury Corner Store at the corner of Main and Bridge Street, 53525 State Highway 30, Roxbury. 3pm to 5pm, Saturday, August 3. For more information, see the event's post on Facebook, or contact the store at 607-326-6045.

Below: A local example of a glacial spillway, where a channel was carved out by water from a melting glacier. Photo taken in Grand Gorge, north of Roxbury; photo courtesy of Robert and Johanna Titus. 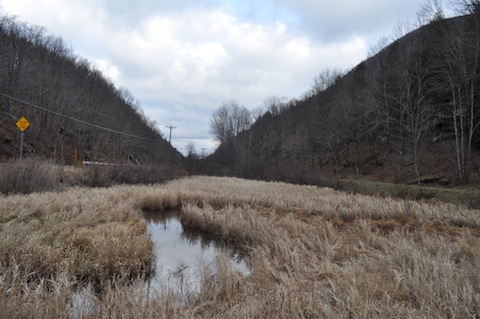