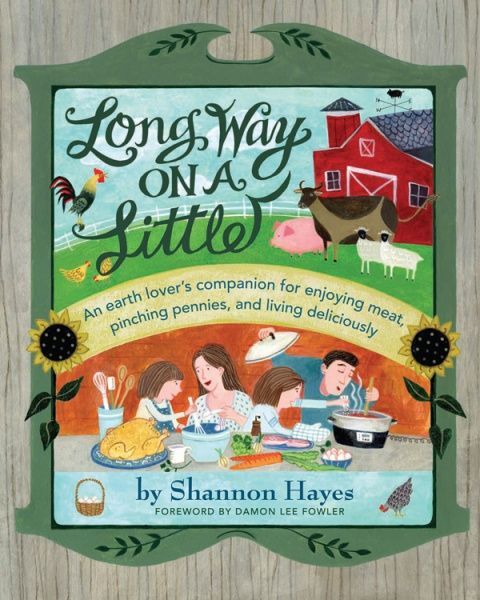 Local author Shannon Hayes has just published her fourth book on the topic of sustainable eating, Long Way on a Little. Hayes, who holds a Ph.D. in sustainable agriculture and community development from Cornell University, works with her family raising grassfed meat on Sap Bush Hollow Farm in Schoharie County. A lifelong farm-dweller, Hayes has opined on the physiological and ecological benefits of grassfed diets in her three previous books, The Grassfed Gourmet, The Farmer and the Grill and Radical Homemakers.

Watershed Post: Local and small-living seems to run deep in your philosophy -- can you talk a little bit about how you came to this particular worldview?

Shannon Hayes: I grew up in it. West Fulton (just outside of Middleburgh), where I grew up and still live today, has always had a timelessness about it that has been relatively unscathed by modernization. Families survived on these steep hillsides by way of subsistence farming and community support. There was never a lot of money, but no one ever seemed to truly suffer for it. I went to school in Cobleskill, which was a different culture. I felt like such a way of life as I had in West Fulton was regarded as backward, but I couldn't help noticing how much more at-peace I felt in the West Fulton/mountain community culture than I did in the faster pace of a community on the suburban fringe. I wound up going forward with my education, and the question of "why life seemed right at home, when all messages seemed to point away from it" was perpetually in the back of my mind. Intuitively I understood that there was a better life to be had than the standard American path, but my educational quest was to understand it. Once I did, then I just came back home again, where I could rejoin the family farm and keep living small.

WP: Left to Write Press, which published this book, is your own independent press, yes? Is its creation an outgrowth of a smaller living philosophy?

SH: Absolutely. It was clear very early on that I need to experience and learn about the world by writing. When I tried to work in the conventional publishing world, Bob (my husband) and I quickly realized that compromises were going to be in order that worked against our lifestyle choices -- we weren't going to make it in publishing unless we could live larger, be more present to the commercial world. And we just felt very grounded here. Self-publishing lets us garner enough of an income from my writing habit to justify doing it, and we don't have to worry about whether we'll make it to the Oprah Winfrey show, or whether I would ever have my own show on the food network (heaven forbid...). I can find my audience and communicate directly with them, and we can live comfortably.

WP: Long Way on a Little is your fourth book; what is the inspiration behind it?

SH: As you know, I spend a lot of time in front of the public selling my family's grassfed meats at the Round Barn market. We have some amazing customers there, who support us as though we are their family. But we also have to regularly face potential customers who scoff at the price of our food....which can be very upsetting, since it suggests that my family isn't entitled to a decent livelihood (which falls at about 200% of the poverty level, but is ample for life in the Catskills). At the same time, I meet families who genuinely seem unable to afford my rib eyes and porterhouses due to hardships in their own families. So I began asking how the needs of both parties could be met -- how could my family garner a decent living growing food, and how could people who need to watch their pennies still manage to work together to build a sustainable local food system? Long Way on a Little is my answer to that....and Wow! Have my own grocery bills gone down as a result, too!

WP: What is the creative process like for a book that blends recipes, public health and agricultural topics?

SH: I suppose it is a little different than most conventional cookbooks. In my mind, I cannot separate food from the social issues that surround it. As a result, this cookbook took years to write. It begins with a big fat stack of clippings, super-old cookbooks that can tell their own history, magazines, and current literature and my own research notes and ideas, and greasy smeared slips of paper with bits and pieces of recipes and food concepts. Eventually, with a lot of experimentation in the kitchen and a lot of writing and re-writing to make things simple and easy-to-do, it somehow turns into a cookbook that is as much about on-the-couch reading as it is about in-the-kitchen action.

WP: If you could only impart one message for your readers to take away from Long Way on a Little, what would it be?

SH: Nourishing, local food can be a reality for everyone. We just have to change how we're eating, and the end results will be tastier than anything we've ever known.