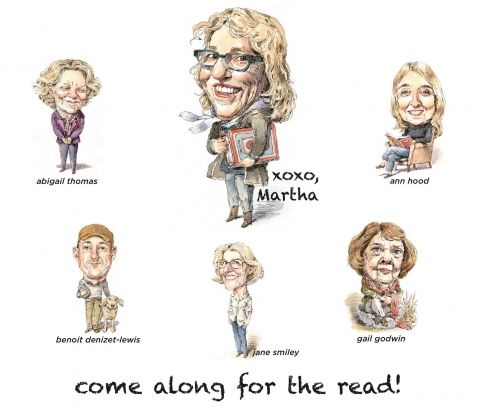 Above: Caricatures of some of the writers who will attend this year's Woodstock Writers Festival, by John Cuneo.

The sixth annual Woodstock Writers Festival looks to be the biggest and best yet.

What started five years ago as a small gathering for people who to love to read has grown into a great place to meet best-selling authors and readers who love their books. This year, the festival, which begins on Thursday, March 19 and runs through Sunday, March 22, will be a fun-packed four days of food, conversation and sharing a passion for the written word.

"The festival is not about the craft of writing or about making connections (to sell a book)," said Executive Director Martha Frankel, herself a well-known author. "It's about readers and writers sharing their love of reading and writing. And sharing an incredibly intimate weekend."

Thursday night opens with a "Story Slam," where participants must tell a story in three and a half minutes. (The event is wildly popular -- tickets have already sold out.) The slam this year must include the phrase “where the wind blows,” which is the title of Stacy Clark's first renewable energy book for children. Clark is co-founder of Inkubate, a website for writers to share original manuscripts with agents, editors and publishers. Inkubate is the Story Slam sponsor this year.

Six intimate day-long workshops fill the schedule on Friday. Topics include "Building Your Social Media Platform" with Kitty Sheehan (writer and social media consultant) and "Let's Start at the Very Beginning: Fiction" with best-selling author Ann Hood ("The Knitting Circle"). Only twelve people can attend each session, which are hosted in the homes of Woodstock residents.

Friday evening kicks off with a cocktail reception followed by "Chris Stein in Conversation with Will Hermes.” Stein, a guitarist who co-founded the band Blondie, marks the group’s 40th anniversary with his book, "Chris Stein/Negative: Me, Blondie, and Advent of Punk."

Saturday is a day of panel discussions, including one titled, "The Critical Role of the Dark in Life and Spiritual Writing: Spirituality Panel" moderated by "Empowerment" author Gail Straub.

Saturday night, after another cocktail reception, is the big event, "The Donahue Interview - With Abigail Thomas.” WAMC radio talk show host Joe Donahue questions the author of "A Three Dog Life" and her work. Thomas will debut her new memoir, "What Comes Next and How To Like It," at the festival.

"Joe asks the most interesting and unexpected questions," said Thomas. "My biggest dread is that I will find myself speechless. I hope I'll be articulate! He has you thinking about your book in ways you haven't thought before."

Thomas, s Woodstock resident, has been part of the Woodstock Writers Festival since its inception and can't imagine not participating.

"There's such excitement. I hear people in the street talking, everybody having such a good time. People are inspired to go home and write. It's a wonderful, wonderful feeling," she said. "And it's all because of Martha!"

Frankel is one of the two founders of the festival, which she started to help keep the local bookstore, The Golden Notebook, alive. She does everything from booking guests and finding venues to delivering lunches by car.

"I love it when I hear people say the fest is so intimate and Woodstock is such a fun town," Frankel said.

She says that if she had any do-overs, she would change the festival's name, and call it the Woodstock Readers Festival.

"The festival audience is the reader,” she said. "New York Times best-seller Jane Smiley ("A Thousand Acres") will be here. Her fans can't not meet her. In Woodstock, there's nowhere to hide!"

Frankel adds that another best-seller was here a couple years ago.

"Cheryl Strayed ("Wild") said it was the best festival she's been to after she traveled the world with her book,” Frankel said. "It's lonely being a writer. This weekend is about being around people who love to read and maybe love your books. There's nothing better!"

The Woodstock Writers Festival. Thursday, March 19 through Sunday, March 22. Woodstock. Sign up for individual events from $15 for panels to $490 for the "whole shebang” at woodstockwriters.com.