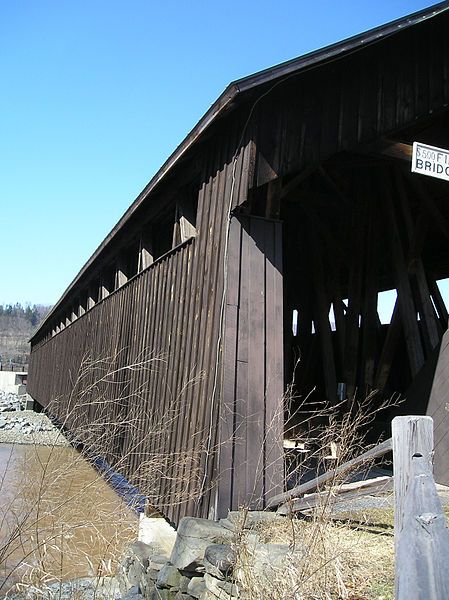 Above: The Old Blenheim Bridge in 2008. Photo by cg-realms at en.wikipedia, via Wikimedia Commons.

The Mountain Eagle writes this week that Paul Loether, the head of the National Register of Historic Places, has promised that the federal government won't strip the now-destroyed Old Blenheim Bridge of its National Historic Landmark designation anytime soon.

The announcement was made in a letter to Schoharie County Historical Society Director Carle Kopecky, the paper reports:

[In his letter, Loether] directed any further action on the proposed withdrawal of designation be postponed indefinitely. He further stated any additional action taken regarding the bridge’s status will be done with consultation from the New York State Historic Preservation Office and the National Park Service Regional Office.

The bridge, which was the longest open-span covered bridge in the world, was destroyed during the August 31 flooding caused by Tropical Storm Irene.

Back in February, concerns that the U.S. Department of the Interior would take away the defunct bridge's historical status erupted in news stories across the region. But those fears, which prompted a letter-writing campaign to the National Register of Historic Places, may have been exaggerated.

Kath LaFrank, who works at the New York State Historic Preservation Office, commented on our February story about the kerfuffle over the bridge. The federal government wasn't planning on rushing forward to de-list the bridge from its list of historic places, she wrote:

The federal government [department of the interior] is very sympathetic to the town's request to stay the delisting and intends to grant the request as soon as appropriate paperwork is received. This will give the town time to collect as many pieces as possible and consider options ... When all possible fragments have been collected, the town will need to work with bridge experts to see if the bridge can be rebuilt or reconstructed. ONLY after careful study and analysis has been done will the dept of the interior make a decision about whether the bridge retains enough integrity to remain a National Historic Landmark

LaFrank commented again a fews days later with the news that Blenheim's wishes were granted:

The good news is that NPS has removed the de-listing of the bridge from the spring agenda and postponed it indefinitely. That is official and the town will get a letter just as soon as its resolution reaches NPS. We all wish the town well in their efforts to find and reclaim the bridge - and possibly to restore or rebuild.