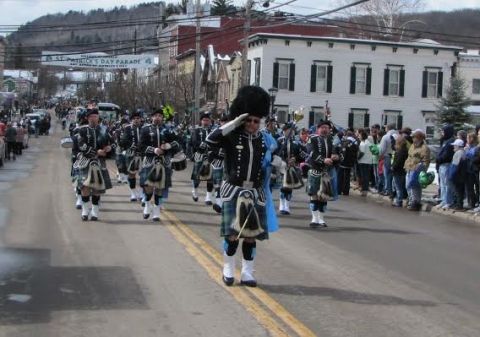 ‘Tis time again to celebrate the Irish, those poetic and tenacious folks who’ve brought so much to the cultural feast. Suffer mightily they may have done, but as Irish fighter Bobby Sands put it, “Our revenge will be the laughter of our children.”

When folks like that party, it’s not to be missed. Here’s our guide to the region’s various St. Paddy's Day festivities.

On Saturday, March 15, come out to Plattekill Mountain in Roxbury for an all-day "St. Platty’s Day" celebration, from 8 a.m. to 5 p.m. They’re cooking corned beef and cabbage to go with the Irish drink specials and live entertainment. Outdoors, there will be a barbecue and a Shamrock Hunt.

On Sunday, March 16, the Halcottsville Volunteer Fire Department and their friends and associates will step off at noon for what a Watershed Post reader has described as “one of the all-time most adorable St. Patrick’s Day parades.” What this tiny Delaware County hamlet lacks in size, it more than makes up for in spirit.

The following weekend, on Saturday, March 22, Delhi's Main Street will host its Fourth Annual St. Patrick’s Day Parade. The parade steps off at noon; among others, you’ll see high school marching bands, Irish pipe bands, dancers, local scouting groups, and a variety of floats. After the parade, Delhi’s Courthouse Square will be rockin’ Irish style to the sounds of Oneonta's Leatherstocking District Pipe Band, the Schenectady Pipe Band, and the Edward P. Maloney Memorial Pipe Band from Binghamton. You can also grab a free ride around the festivities on the Roaming Railroad.

At Windham Mountain, they’re paintin’ it green for the Irish I Was Skiing/Riding Festival. Chase leprechauns on the slopes and enjoy Guinness specials all weekend long, March 15 and 16. Enjoy the music of the Ruffians on Saturday from 3-6 p.m., and Irish step dancing on the patio from 11 a.m.-1 p.m. on Sunday.

The Tannersville St. Patrick's Day parade will step off at 1 p.m. on Saturday March 15 and march up Main Street to Village Hall. Across the street at the Spinning Room is the afterparty, full of live music, refreshment and good cheer.

Gavin’s Irish Country Inn in Cornwallville, in the heart of Greene County's "Irish Alps," will be celebrating from on Monday, March 17. There's an Irish lunch at noon (reservations required), and the pub will host free music by Rakish Paddy from 1-3 p.m.

The owner of the Eureka Market & Café in Grahamsville spent eight years in Dublin, and those memories will guide the creation of a splendid, hearty traditional Irish breakfast each morning from March 14 through 17. Tuck into some authentic Irish sausages, thick Irish bacon, and black pudding, served with two eggs your way, half a grilled tomato, and baked beans, and topped off with home-baked Irish soda bread. Breakfast is served from 7:30-11 a.m. on weekdays and 8 a.m.-1:30 p.m. on Saturday and Sunday.

In Rock Hill, marchers will be lining up and kids will be frolicking by noon on Saturday, March 15. The hamlet's fourth annual St. Patrick's Day parade steps off at 1 p.m. Cheer for the police and fire lifesavers dressed in their best, enjoy antique cars, horses, floats and the stirring rhythms of the Walker Valley Marching Band and piping and drumming by Orange County’s Ancient Order of Hibernians.

They’ll be parading in Jeffersonville on Saturday, March 15 too. It’s the third annual St. Pat’s march of the Jeffersonville Fire Department. All are invited to dream up a float, or just put on some green and join the fun. Lineup starts at noon on Callicoon Center Road, and the parade steps off at 1 p.m.

Ulster County’s Ancient Order of Hibernians are a passionate bunch, and they’ll be turning Kingston a brilliant green from the Stockade District to the Rondout waterfront on Sunday, March 16. First comes the two-mile Shamrock Run (or walk, if you’d rather) down Broadway that brings out thousands each year. The parade that follows is the largest in the Hudson Valley, and a fair bit o’ reveling by the Rondout is sure to follow.

On Monday, March 17, New World Home Cooking in Saugerties will be celebrating with the traditional Celtic and folk sounds of Spatter The Mud. The band members are regulars at New World's traditional Irish sessions, held every Monday evening.

Know of another great local St. Patrick's Day event in the Catskills? Let us know with a comment below.