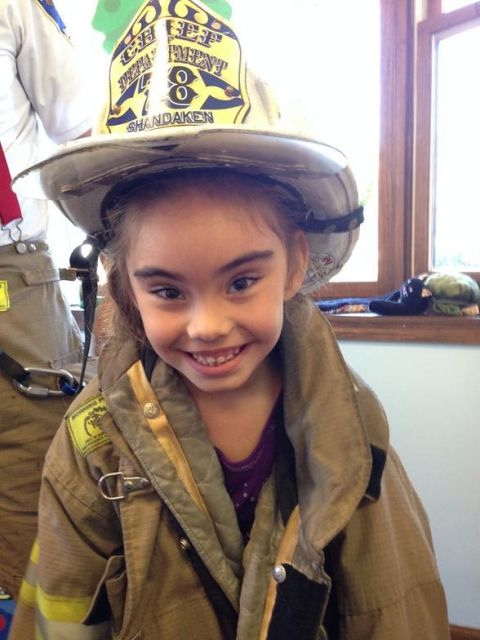 Not only is this week Fire Prevention Week, but Gov. Andrew Cuomo has just declared that today, Oct. 7, is Firefighter Appreciation Day. To mark the occasion, we've asked Rich Muellerleile, a firefighter, paramedic, and longtime Watershed Post columnist to give us a few fire safety tips. Read all installments of Rich's column, Stayin' Alive, by clicking here. - Ed.

“In the first Place, as an Ounce of Prevention is worth a Pound of Cure, I would advise 'em to take care how they suffer living Coals in a full Shovel, to be carried out of one Room into another, or up or down Stairs, unless in a Warmingpan shut; for Scraps of Fire may fall into Chinks and make no Appearance until Midnight; when your Stairs being in Flames, you may be forced, (as I once was) to leap out of your Windows, and hazard your Necks to avoid being oven-roasted.” – An old citizen

As incredible as it may seem, this quote, which begins with a familiar household adage and was published as an anonymous letter in the Pennsylvania Gazette in 1735, was actually written by the newspaper's publisher, Benjamin Franklin.

Franklin's letter was a succinct and relevant fire safety message that, for the most part, does not apply to our present day – unless you routinely carry hot coals from room to room to keep comfortable. (After all, we are in the Catskills.)

It is without doubt, however, that the "Ounce of Prevention" axiom holds resoundingly true in many of the things we do from day-to-day. No matter what calamity you deal with, it is much more easily addressed by preventing it altogether than having to deal with its aftermath.

Enter the annual tradition of Fire Prevention Week, which falls on Oct. 5 - 11 this year.

It was created after a disaster: the Great Chicago Fire. The fire began on Oct. 8, 1871 and burned through the next day, killing more than 250 people, left 100,000 homeless, destroyed more than 17,400 structures, and burned more than 2,000 acres, according to the National Fire Protection Association.

According to legend, the Chicago fire broke out after a cow belonging to Mrs. Catherine O'Leary kicked over a lamp and set a barn, and then the whole city, on fire. (Later, a reporter admitted that he made the cow story up.)

Forty years later, the Fire Marshals Association of North America, decided that the anniversary of the fire should be commemorated by educating the public about fire safety instead of celebrating the fire itself.

In 1920, President Woodrow Wilson issued the first National Fire Prevention Day proclamation. Every president since has proclaimed a national observance during that week in October.

The theme in 2014 is the much less pugnacious “Working Smoke Alarms Save Lives.”

Malfunctioning smoke alarms or no alarms at all cause roughly two out of three fire deaths. Simple smoke and carbon monoxide maintainence tips are lifesavers:

Remember to have a plan when smoke alarms go off. Practice exit drills in the home and have a safe meeting place for your family in the event of a fire (for example, the big tree in the front of the house). The same applies to carbon monoxide alarms -- especially during the upcoming heating season.

And don't forget to clean your chimney and furnace.

“One of the best things a homeowner can do is make sure that all appliances that require combustion are maintained properly,” said Phoenicia Fire District Chief Gary Carr. “Many calls that we respond to are fires caused by individuals that do not perform regular preventative maintenance on their chimneys or heating appliances. This holds true not only to fire emergencies but carbon monoxide issues.”

Aside from this year’s theme, be sure to be aware of other fire-related hazards. A great fire safety resource for homeowners, parents, educators, and the fire service alike is the National Fire Protection Association’s website at nfpa.org. For a fun and educational experience for your kids, send them over to sparky.org – even though Sparky the Fire Dog turned 63 in 2014, he is looking better than ever.

Check in with your local fire department for additional information as well. Just make sure to look up their "social" number in the phone book unless it is an emergency – in that case, the number is 911.

If you’re really interested in making a difference, ask about volunteering with your local fire department. They are always looking for help.

As the times change and we move forward to this world of iPads, smartphones, and Twitter, it is easy to get overwhelmed. We can become complacent about the things that rarely rear their ugly heads. But when they do, it is generally catastrophic. Remember that no matter how overwhelmed or absentminded we become, that “ounce of prevention” from 1735 can protect you and your loved ones today.

PS: And as for Ben Franklin, he co-founded the first volunteer fire company in Philadelphia in 1736. The members agreed to carry six buckets apiece and two linen bags to every fire they were alerted to. Up for the challenge? Visit fireinyou.org.

Rich Muellerleile is the captain of the Shandaken Ambulance Service, and has been a firefighter for 17 years. He has served as a career firefighter and paramedic with the Arlington Fire District in Poughkeepsie for ten years and also volunteers with the Woodstock Fire District. He posts Catskills safety tips in his column, Stayin' Alive.