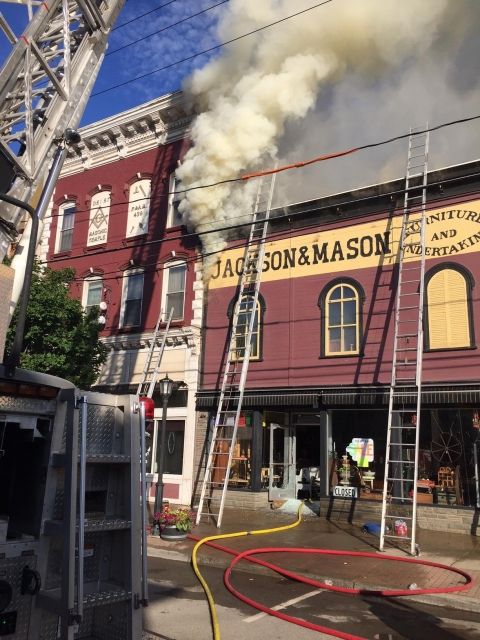 Area firefighters spent much of Thursday morning fighting a massive blaze in the Delaware County village of Delhi, which destroyed two buildings on Main Street, according to multiple media reports and updates posted to the Delaware County Department of Emergency Services Facebook page.

The fire reportedly started around 6:30 a.m. on Thursday, Aug. 18, in the kitchen of the Village Pizzeria and Restaurant, located at 106 Main St. The fire then spread to the Delhi Masonic Lodge, located on the building's second floor, and then to Stephen's Antiques and Collectibles next door at 110 Main St. in the former Jackson & Mason building, according to Steve Hood, the director of Delaware County Emergency Services, who spoke with the Daily Star.

(The Watershed Post was unable to reach Hood, or anyone else in the Department of Emergency Services, because of a power outage that affected electricity and telephones in much of the village of Delhi this morning.)

Hood told the Daily Star that the flames were knocked down within two hours, but that crews remained on scene waiting for hotspots to break out.

Above: Smoke from the fire loomed over Main Street on Thursday morning. Photo by Lisa Wisely.

According to the statement, firefighters were able to keep the fire from spreading to adjoining structures on the village's tightly-packed Main Street, but were unable to save the two buildings that burned.

The Jackson & Mason building was at least 100 years old, according to a postcard depicting its facade found in the collection of the Delaware County Historical Association.