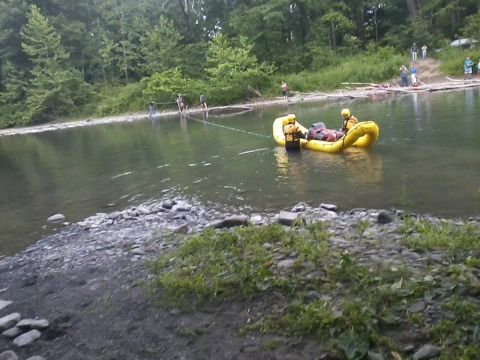 Back-to-back emergencies on the Fourth of July weekend kept Schoharie County emergency responders busy in the town of Fulton.

First responders rescued a woman from a serious ATV crash and then treated a man after he fell off a cliff into the Schoharie Creek, according to a press release issued by the Schoharie County Sheriff's Office.

Dispatchers received a report that a 25-year-old woman from New Jersey had been seriously injured while driving an ATV on a trail located about two miles off Rossman Hill Rd. in the town of Fulton.

The woman, who reportedly was riding in a group of ATVs, hit a rock and was ejected from the all-terrain vehicle, sustaining a head injury, according to News 10 Albany.

Police did not indicate whether she was wearing a helmet when she crashed.

Due to the location of the woman on a wooded trail, ATV rescue vehicles were used to transport personnel to the scene, police say.

The woman was then transported by ATV to a landing zone along side of Rossman Hill Rd, where a helicopter flew her to Albany Medical Center. She was reportedly in critical condition, police say.

Just as units were clearing the scene at Rossman Hill Rd., Schoharie County 911 dispatchers received another call at 6:30 p.m. reporting that a male subject had fallen approximately 15 feet off of a cliff into the shallow water of the Schoharie Creek.

This second incident also happened in the town of Fulton, this time at a location known as Bouck Island, which is located at the intersection of Redling Rd. and Route 30.

News 10 Albany identified the man as 60-year-old Mike Silocott, who was camping with his friend James Marczak. Both men were from Troy.

Marczak told the news crew that Silocott had been carrying some firewood to their campsite near the top of the cliff when he likely lost his footing, causing him to slip over the edge.

Marczak says he turned around and Silocott was gone. He says Silocott had been banging some firewood and likely lost his footing.

Marczak looked over the edge of the cliff and saw Silocott turned over in the water. He asked Silocott if he was alright and Silocott answered that he didn’t know.

“He could have been dead, I was worried like crazy,” says Marczak.

The Middleburgh Fire Department's water rescue team moved Silocott to the east side of the creek, where he was treated at the scene for hip and back pain and transported by ambulance to the Bassett Hospital of Schoharie County, according to the Sheriff’s Office press release.