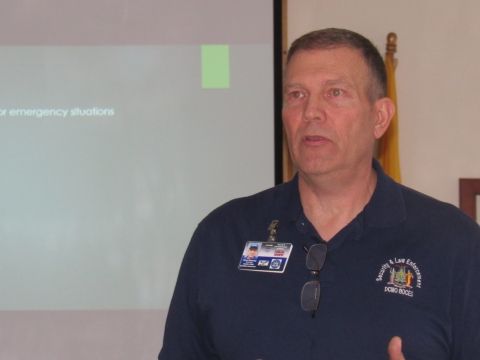 Above: Gary Ramsey, a BOCES law enforcement instructor, pitched the advantages of a Community Emergency Response Team (CERT) to the Delaware County Board of Supervisors on Wednesday, Feb. 24. Photo by Robert Cairns.

Delaware County is looking to form a team of volunteers to supplement the emergency services provided by fire departments and emergency medical personnel.

Gary Ramsey, a law enforcement instructor at DCMO BOCES in Masonville, gave a presentation on Community Emergency Response Teams (CERT) at the Feb. 24 meeting of the Delaware County Board of Supervisors.

The county's emergency services director, Steve Hood, said he expects that a resolution to form a CERT will be on the agenda at the board's next meeting.

Ramsey explained that a CERT would not replace the services provided by police or volunteer fire and emergency medical departments, but would provide less skilled services. A CERT in neighboring Broome County, he said, is often called upon for traffic control and search-and-rescue operations.

Ramsey noted that Delaware County's history of floods and said emergency responders could use the help.

Above: The logo of the Broome County Community Emergency Response Team. Delaware County supervisors will likely vote, this month, to create such a team.

“Delaware County leads the state in natural disasters,” he said. “It's not something to be proud of, but we're aware of it. We have excellent emergency response services, but these services can become overwhelmed.”

Ramsey said that the county's fire and emergency medical services advisory boards, made up of officers from local fire departments, have endorsed the idea, as have the supervisors who sit on the board's emergency services committee. He said that the sheriff's office and state forest rangers also support the plan.

If the plan is approved, volunteers would be recruited across the county. They would receive basic training and meet monthly. Prospective team members would complete online training provided by the Federal Emergency Management Agency (FEMA) and would be subject to a background check. After completing those steps, the volunteers would be interviewed by Hood and would be placed on the team at his discretion.

Hood would also be responsible for activating the CERT.

“Sub-teams” of volunteers will be placed in different areas of the county if there is enough volunteer response. “It's a huge county,” Ramsey said.

Equipment for the CERT would be provided by the state, at no cost to the county, Ramsey said.

Ramsey said that the Broome County CERT “has evolved to be the primary call” for search-and-rescue. He said that Delaware County's CERT will evolve to meet the county's needs.

Supervisors had some questions, but were supportive of the idea.

Andes Supervisor Bud Gladstone asked about liability insurance. Hood said he would ask that the CERT be covered by the county's self-insurance fund, just as local fire departments are.

Hamden Supervisor Wayne Marshfield asked about the supervision of the unit.

“Everybody has to know where everybody is in an emergency,” Marshfield said.

Hood replied that a local fire chief or police chief could be the contact when the CERT is deployed to a community, deciding where the team could best be used. The group would be under the command of a team leader.

In the event of a major emergency, Ramsey said, the CERT leader would be part of the Emergency Operations Center at the Delaware County Public Safety Building and would direct the team's operations from there, in coordination with the heads of other agencies.