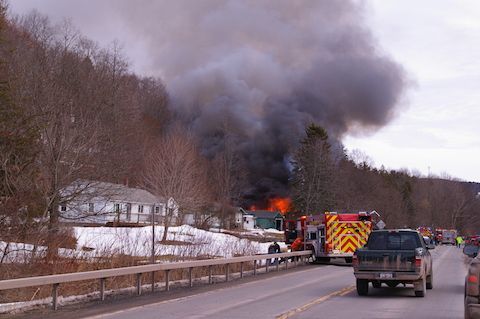 A man was badly burned in a series of explosions in a garage on Route 30 just outside of the village of Margaretville in Delaware County on Monday, March 16. In between blasts, two of the man’s neighbors, Allen Misner and Cody Ackerly, helped drag him to safely as the garage burned.

The man was severely injured, Misner, Ackerly and other witnesses at the scene report.

On Tuesday, March 17, the staff of Westchester Medical Center's burn unit said that the man's medical condition is stable.

The man is still not being identified by the New York State Police, according to spokesman Nathan Riegal. But because his condition is stable, his next of kin have been notified and his name has been widely publicized by other newspapers, we are identifying him as Sandy Scudder, a Margaretville resident.

Misner, who works at B&D Motors, a garage and car dealership in Margaretville, was taking a client for a test drive along Route 30 when he passed Scudder's garage around 12:15 p.m. He saw smoke coming from the building and the garage's door lying in the middle of the highway.

Cody Acklerly, a neighbor whose family once owned the garage, ran down from his nearby house to join Misner at the scene. As the men stood there, they could hear Scudder, the homeowner, yelling for help from inside the garage, which was now on fire.

“The floor was blown up, and there was a Jeep on its side,” Ackerly said. "The explosion picked it up."

“I couldn’t see him,” Misner said. “You could tell that the explosion happened from below, because the concrete floor was all buckled up."

Ackerly and Misner ran into the burning garage, which was filled with explosive materials, to rescue their neighbor.

“I didn’t even think it was a decision,” said Ackerly at the scene. “It’s my neighbor. I’ve known him my whole life."

But they couldn’t reach Scudder, or even see him. He was in the back, behind wreckage from the ceiling, which had caved in, shrouded in smoke.

Unable to reach Scudder, they urged him to crawl towards them. He did, slowly. As he came into view, both men realized that Scudder was badly burned. But he was conscious and he could see.

“I just kept my eyes on his eyes, telling him to keep going,” Ackerly said.

Scudder made it to them. Ackerly and Misner grabbed him and dragged him free of the garage. Scudder was taken from the scene and was later airlifted to Westchester Medical Center by helicopter.

Witnesses heard multiple subsequent explosions in the garage, which burned completely to the ground as first responders from Margaretville and Arkville fought the blaze. One explosion sent metal shooting across the highway, several witness said. The heat was so intense that it melted the siding off the adjacent house. The house itself was saved.

The garage had once been a commercial garage owed by the Ackerly family, said Cody Ackerly, who remembered that it had burned once before, when he was young.

“I’m glad that I don’t remember that,” he said. “I don’t know if I could handle it twice.”

Several local volunteer fire departments responded to the scene. The fire appeared to be under control by 1 p.m.

Scudder was working on a gas tank on a vehicle in his garage when the explosion happened, according to Riegal, the State Police spokesman.

"He was working in the garage on his personal vehicle when vapors from an unknown source ignited, causing an explosion," Riegal said.

"We know that he was in the pit, we know that he was working on the fuel tank of the Jeep," Hood said on Wednesday, March 25. "We didn’t find any evidence of welding. That was being speculated at the scene. Until we can talk to [Scudder] about what happened just prior to the explosion, we won't know what caused it."

An online fundraiser for Scudder had already raised over $4,000 a day after the explosion. A week later, it has raised over $10,000, and a community barbecue fundraiser raised an additional $11,500 a few days later.

Update 3/17/15: This story has been updated with more information. - Ed

Update 3/25/15: A previous version of this story quoted the New York State Police as saying that the explosion was caused when Sandy Scudder was welding. Delaware County Emergency Management Coordinator Steve Hood tells us that fire investigators have found no evidence of welding. This story has been edited to reflect that new information.

Below: More photos from the scene. 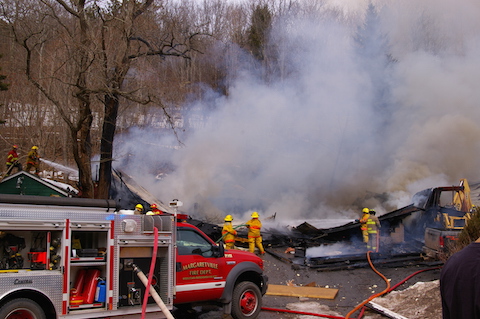