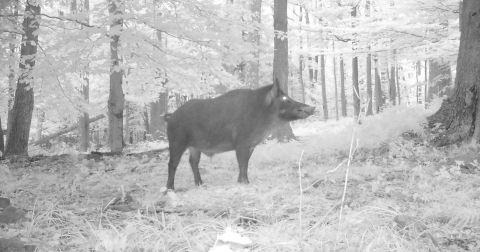 Above: A trailcam in Delaware County catches a nocturnal glimpse of an elusive wild boar. Photo taken in August 2013; courtesy of USDA APHIS.

A statewide ban on the hunting and trapping of feral swine -- also known as wild boars or Eurasian boars -- went into effect on Monday, the New York State Department of Environmental Conservation (DEC) announced in a press release.

Until recently, boars were largely unknown to New York State, even as burgeoning populations of wild pigs wreaked over a billion dollars' worth of destruction a year across other parts of the country. But in recent years, feral swine have been found breeding in the wild in a few parts of New York State, the descendants of boars that escaped from private "canned" hunting preserves.

Many other states have encouraged the hunting of wild boars in an effort to control their populations, but without much success. Banning the hunting of an animal that state officials want to rid the landscape of seems paradoxical. But scientists who study the animals say that allowing private hunting can interfere with state-sanctioned efforts to bait and trap boars, and has even encouraged hunters to release more of the animals into the wild for sport.

In the release, Joe Martens, commissioner of the DEC, defended the agency's decision not to turn to hunters for help:

"Hunters have offered to assist our efforts by hunting for boars wherever they occur, but experience has shown this to be counterproductive," Martens said. "As long as swine may be pursued by hunters, there is a potential conflict with our eradication efforts. Eurasian boars often join together to form a 'sounder,' the name for a group of pigs that can number 20 or more individuals. Shooting individual boars as opportunities arise is ineffective as an eradication method, (as it) often causes the remaining animals to disperse and be more difficult to remove."

Over the last few years, the DEC has been working closely with federal biologists from the USDA to trap and eradicate small populations of boars that have become established in six New York State counties: Tioga, Cortland, Clinton, Onandaga, and along the Delaware/Sullivan county border in the Catskills. The eradication effort has been expensive, DEC officials say, but it has paid off: About 150 boars have been killed through the program.

"We've been working to eliminate swine in the known population areas, and we think we're right on target," Gosser said. "We've been very effective about removing the swine, and we've been really pleased with the support and cooperation we've gotten from landowners."

This January, the USDA conducted helicopter surveys of the areas where boars have been breeding -- and brought a sharpshooter with a sniper rifle along, in case they had a chance to take a shot at one. (See the Watershed Post's Jan. 13 story, "Bad news boars," for more coverage of the USDA's efforts to eliminate boars from New York State.) During the helicopter flights, the USDA crew shot no boars -- nor did they even see one from the air, Gosser said.

Even if all breeding feral swine have been eliminated from New York State, there is still a high risk that the species will be re-introduced from private hunting preserves. On Sept. 1, 2015, another piece of the DEC's new wild boar legislation goes into effect, which will make it illegal to keep, sell or transport the animals in New York State. Until then, it is still legal to keep and hunt Eurasian boars on private preserves.

"We won't be out of the woods til this law is fully in effect, so we're going to maintain our vigilance," Gosser said.

Local landowners who have had problems with feral swine on their property have been generally supportive of the USDA and DEC's efforts to trap and eliminate them. But the DEC's ban on hunting boars has been controversial. Delaware County farmer Peter Andersen, whose farm in Long Eddy has been the site of a USDA trapping program, told the Watershed Post in January that he thinks anyone with a hunting license should be allowed to shoot a boar.

"The opportunity to shoot the pigs happens so infrequently that when you're there, you've got to do it now," he said. "A neighbor will call me and say, 'There's pigs in my yard' -- in 15 minutes, they're gone."

Landowners whose property is being damaged by boars can apply to a DEC regional office for a nuisance permit that would allow them to shoot the animals, said DEC spokesperson Lori Severino.

"There are special permits in these situations," Severino said. "But to just go ahead and take [a boar] without the permit -- they could be fined. It wouldn't be legal to do it without a permit from DEC."

State wildlife officials want to hear from anyone in New York who may have caught a glimpse of a wild boar, dead or alive. The DEC is asking that anyone who has seen a boar -- or any free-roaming pig -- email their wildlife division at [email protected] with the subject line "Eurasian boar." The DEC's recent press release included instructions for making a report:

Please report the number of animals seen, whether any of them were piglets, the date, and the exact location (county, town, distance and direction from an intersection, nearest landmark, etc.). Photographs of the animals are especially helpful, so please try to get a picture and include it with your report.

"It's difficult to distinguish between a domestic pig and a wild boar," Severino said. "There are very few out there at this point, but we're trying to pinpoint where they are specifically."