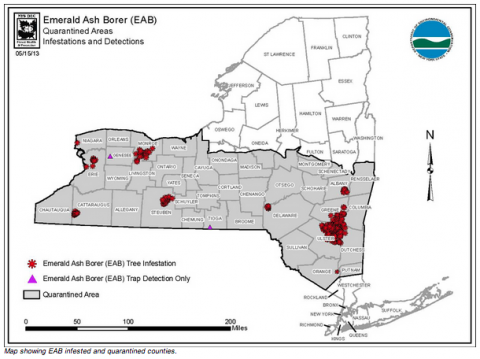 The New York State Department of Environmental Conservation (DEC) announced Monday that emerald ash borer has been found for the first time in Delaware and Otsego counties. The emerald ash borer, a Asian beetle that was first found in the U.S. in 2002, is poised to virtually eliminate ash trees from Northeastern forests, including New York State's more than 900 million ash trees, if allowed to spread unchecked.

The beetles were recently found in an area near the village of Unadilla, which lies on the border between Delaware and Otsego counties. The infestation was reported by a timber harvester working in a private woodlot, the first report of the insect from a commercial woodlot.

Worry about the emerald ash borer and other invasive wood-boring insects is also behind the DEC's restrictions on moving untreated firewood in New York State to within a 50-mile radius of where it was cut.

In a management plan for the emerald ash borer published in 2011, the DEC describes a strategy dubbed "SLAM" (the acronym stands for Slow Ash Mortality). With little hope of eradication, the agency is seeking to delay the inexorable march of the beetle, to give foresters and scientists more time to plan for future infestations and to research better control methods:

Applying a SLAM approach will not eradicate EAB, nor will it eliminate tree mortality. The goal of this management strategy is to slow the local invasion process and allow land managers time to be proactive rather than simply reacting to overwhelming numbers of dead, often hazardous trees.

According to data on the DEC's website, about 8 percent of the tree cover in Delaware County is ash. All ash trees, in towns or in forests, are vulnerable to the beetle, and any tree that is infested will die in two to four years if left untreated. Treatment of individual infested trees with insecticide is possible in city streets or backyards, but the treatment can be expensive.