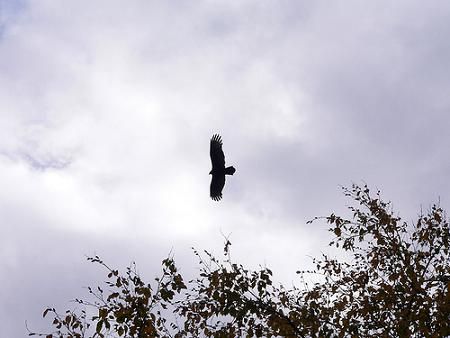 Something strange haunts a certain house on North Manheim Boulevard in New Paltz. You may have noticed it. One recent commentor on the Ulster Publishing forum did:

If you are driving on Henry Dubois Road in New Paltz where it intersects with North Manheim,  there is a flat roof one-story house that almost always has a DEAD BLACK DUCK/TURKEY hanging upside down from [its] neck (dead!) on top of the house!!!!!!!!!!!!!!!!   [They've] got this white pvc pipe thing holding it up.  Does anyone know what's up with this dude ?    Is this some witchcraft thing that they practice or something ???

According to Times Record-Herald story from last year, it's not witchcraft. It's a dead vulture. (Click on the link -- there's a photo.) It's part of a federal program designed scare away the plagues of vultures that have made Manheim their home for years:

One residence has served emphatic notice that the birds that have congregated on its roof are not welcome: A pair of tripods have been installed on the building's flat roof, each bearing the dangling carcass of a vulture. Though the display strikes some folk as savage, and even though the birds are protected within the state, the carcasses have the full approval of the federal government, which installed them last week....It's meant as a warning to the living and evidently it's working, according to USDA Wildlife Services biologist Ken Preusser, who has charge of the project.

In the Record story, which was written almost one year ago, the USDA wildlife official promised that the set of frozen culture corpses on top of the home would be removed after a month, when the carcases started to rot. Then, he said, the house would be "vulture-free."

But it looks like that vulture carcass, or several just like it, has been spotted hanging above the house for much of the year.

Contacted today by the Watershed Post, Preusser said that he didn't know whether fresh vultures were still being installed on the Manheim house. Referring to the carcasses as "vulture effigies," as the scare-birds are known in the trade, he said that "chiefly, the effigies stay up for one to two months, sometimes longer." He added that there is no limit on how many effigies can be installed.

"If the birds are present, [the homeowners with effigies] will call us," he said. Then, the USDA will provide frozen vultures, which are regularly shot  near airports to keep them from flying into jet engines. The supply of federally-provided dead vultures only ceases when the live vultures move elsewhere.

Preusser said that the effigies are usually "very effective." Have they worked in New Paltz? Are the vultures still roosting on North Manheim? Got any photos of the scare-vulture or its living brethren? Let us know by commenting on this article, by emailing [email protected], or by uploading your vulture photos to the Watershed Post flickr page.