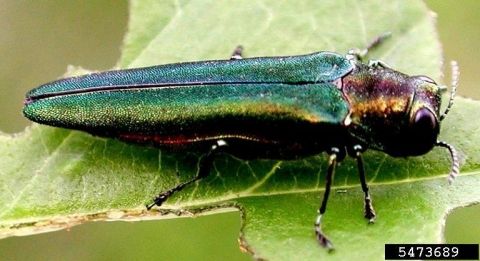 The march of the invasive emerald ash borer across the Catskills continues. Today, the state Department of Environmental Conservation announced that the green beetles, which infest and kill ash trees, have been found in the Kenneth L. Wilson Campground in Woodstock.

From a DEC press release (linked above):

The discovery was confirmed after a DEC employee recovered a single EAB beetle from a purple prism trap that was placed in DEC's Kenneth L. Wilson campground in the Town of Woodstock, Ulster County.

"Because of the close proximity to known infested areas, campers should not bring untreated firewood to any of the Catskill campgrounds," said Commissioner [Joe] Martens. "Untreated ash firewood that is brought into these campgrounds from as little as five miles away can greatly accelerate the spread of this insect and the death of the cherished ash trees that exist in the Catskill Preserve. Heat-treated firewood is the only firewood that is safe to transport because the heat eliminates any pests living inside the wood."

The emerald ash borer was first found in Ulster County in 2010. Scientists fear that the destructive beetle's spread could decimate New York State forests, which are 7 percent ash trees.

Individual trees can be saved by aggressive insecticide treatment, but the approach does not work on entire forests. Towns with ash trees planted along streets and sidewalks have already begun to tackle the problem of what to do with their trees when the beetle takes up residence. Last year, the Catskill Regional Invasive Species Partnership launched a town-by-town program to inventory ash trees.

But the New York Invasive Species Clearinghouse, which maintains a useful emerald ash borer website with resources for communities and landowners, stresses the high stakes in the race against the beetle: