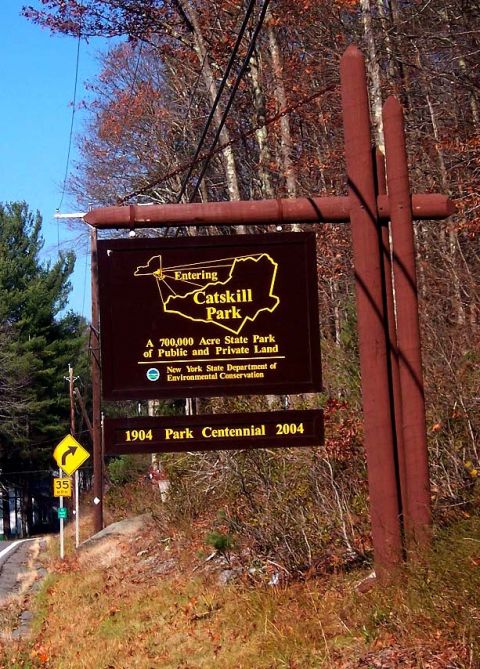 A New York State budget earmark of $500,000 to fund projects in the Catskill Park, announced earlier this year, may be a fraction of what Catskills regional advocates had originally hoped for. But it’s enough to get the ball rolling on more ambitious projects in the region, say local leaders, who plan to use the funds to develop a comprehensive plan for outdoor recreation in the Catskill Park.

On Thursday, Nov. 3, state senator Jim Seward visited the Catskill Watershed Corporation (CWC) in Margaretville to announce the projects that would be funded with the $500,000 allocation in the 2016-2017 state budget. In addition to developing a comprehensive plan for outdoor recreation in the region, the funds will be spent on designing mountain biking trails in Mount Hayden and the Shandaken Wild Forest, and on a variety of projects aimed at increasing public access to outdoor recreation on publicly owned lands.

Calling the funds a “down payment” on future investments in the Catskill Park, Seward acknowledged that the funds fell far short of what local advocates have been seeking for years: a $4 million dedicated line item in the state budget for the Catskills.

“I know the ask was much higher,” Seward said, prompting laughs from the local nonprofit and government representatives in attendance. “This is not an end here. We consider this a beginning.”

A plan for the Park

The Catskill Park, established in 1904, spans 700,000 acres in Delaware, Greene, Sullivan and Ulster counties, more than a third of which is state-owned forest preserve. Like its larger cousin, the Adirondack Park, the Catskill Park is deemed “forever wild” in the parts owned by the state — protected from development by the New York State constitution.

Unlike the Adirondack Park, which has its own state-funded park agency and a $1.5 million line item in the 2016-2017 state budget, the Catskill Park receives little funding from New York State.

CWC director Alan Rosa said that a comprehensive plan was developed for the Adirondack Park several years ago, and has given a boost to groups seeking project funding in the Adirondacks.

Bill Rudge, an official in the New York State Department of Environmental Conservation’s Region 3, agreed that having a regional outdoor recreation plan in place could strengthen arguments for increased funding for the Catskill Park.

“I think this planning process is going to result in a consensus among Catskills communities and stakeholders, and that’s going to be a powerful tool,” Rudge said.

The recreation plan is expected to take about a year to develop, said Rosa.

Local leaders will be looking for public input on the plan, said Jeff Senterman, director of the Catskill Center for Conservation and Development, a local nonprofit that has been at the forefront of efforts to lobby Albany on behalf of the Catskill Park.

“The goal is to look at the Catskill Park as a whole, and identify opportunities to connect the Park to Main Streets and communities,” Senterman said.

Past efforts to improve recreation on public lands have taken a “silo approach,” with little coordination between the state DEC and New York City Department of Environmental Protection (DEP), said Rudge, who says that communication between the two agencies has improved over the past few years.

“The city of New York has come a long way in opening their lands to recreation,” Rudge said. “We’ll be looking for opportunities to make connections (between DEC and DEP lands).”

The CWC will seek competitive bids from groups who seek to spearhead the development of the comprehensive plan, said Rosa. The nonprofit, which administers grants and loans in the New York City watershed region, plans to put out a request for proposals next week.

In addition to the outdoor recreation plan, the earmark will fund a laundry list of projects identified as priorities by the state DEC and the Catskill Park Advisory Committee, a group of local stakeholders.

Many of the projects are aimed at increasing access to public lands by providing more parking, building new trails and making public lands more accessible to people with disabilities.

At the meeting, Senterman announced a list of projects slated to go forward:

-Overlook Mountain: A 30-car parking lot and signage on MacDaniel Road, and a new trail to connect the parking lot with the Overlook Trail

-Wilson Campground: A six-mile multiple use trail system accessible to mountain biking, including a bridge over the Little Beaver Kill

-Tice Ten Eyck Mountain: A 5-car parking lot and signage on Peck Road, and a hiking trail to the summit

-Sundown Wild Forest: An accessible pedestrian trail from the Peekamoose-Table Trailhead on County Route 42 to the Blue Hole kiosk, and an expansion of the Upper Cherrytown Road parking lot

-Colgate Lake Wild Forest: An expanded parking lot at Colgate Lake, and two miles of multi-use trail around the lake

-Delaware Wild Forest: Rehabilitations to the snowmobile trail in Cat Hollow, including a bridge replacement

Local advocates who have long been working toward a more coordinated regional approach to outdoor recreation are eager to get started.

“We’ve been talking about this for a couple of years now,” Senterman said. “To see the work begin is exciting.”