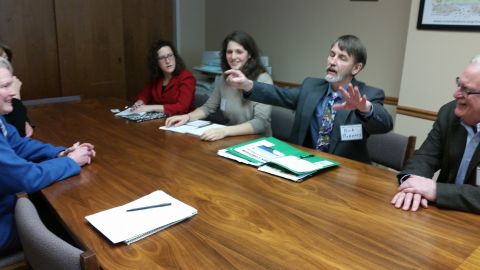 Above: Rick Roberts, the president of the Catskill Mountain Club, advocating for dedicated funding for the Catskill Park in the 2016-2017 New York state budget in Rep. Kevin Cahill's office on Feb. 9, 2016. Photo by Julia Reischel.

Despite months of fierce lobbying in Albany, advocates for the Catskills region of New York did not convince lawmakers to earmark a package of funds for the Catskill Park in the 2016-2017 New York state budget, which was hammered into agreement in the wee hours of Friday, April 1.

Advocates for the Catskills spent the first months of 2016 lobbying hard for the state to create $4 million line item for the Catskill Park in the Environmental Protection Fund (EPF), a request they have repeated for years.

On Feb. 9, during a Catskill Park Awareness Day lobbying event, about 60 people representing the Catskills went door-to-door among legislative offices in Albany to urge lawmakers to commit dedicated funding to the region.

But, despite support from Sen. James Seward, Sen. John Bonacic, Sen. George Amedore, Rep. Aileen Gunther and Rep. Kevin Cahill, all of whom represent portions of the Catskills, the Catskill Park did not receive a line item in the final budget.

“It’s a sad day for the Catskill Park,” said Ramsay Adams, the executive director of Catskill Mountainkeeper and the co-chair of the Catskill Park Coalition, which spearheaded the lobbying effort. “One of the great gems of New York State is just completely ignored again.”

No line item in the EPF

The Catskill Park, a 700,000-acre region of forest preserve and wilderness located only 100 miles north of New York City, has never received its own dedicated funding in the New York budget, said Adams.

Contrast that with the Adirondack region in the north of New York state, which has had its own state-funded agency, the Adirondack Park Agency, since 1971. The APA received $1.5 million in the 2016-2017 state budget, according to the budget legislation document.

The Catskill Park Coalition has lobbied for a dedicated funding package in the EPF for four years running, and this year there were encouraging signs that it might finally happen, Adams said.

“I thought there would be a package that totaled about $4 million,” Adams said. “We had very positive meetings with the key senators on committees and also representatives. We met with the governor’s staff and with the senior staff in the [New York State Department of Environmental Conservation], and everybody indicated that a package for the park would be included in the budget.”

Indeed, the New York State Assembly’s draft budget did include a $4 million line item for the Catskill Park.

But neither the New York State Senate's nor the Governor’s version of the budget included such a package, and in the final furious hours of dealmaking yesterday, a Catskill Park line item was left on the cutting room floor.

Money is coming to the Catskills in the 2016-2017 budget, but all of it is reappropriated from previous years and is spread throughout the budget in odd earmarks, according to Adams and Senterman.

The money will likely fund a model fire tower, a pavilion, a ranger cabin museum, electric upgrades and electric vehicle charging stations at the site, Senterman said. It is funded as a reappropriation from previous years, and will be handled through the New York State Department of Environmental Conservation, according to the budget.

Above: The Catskill Interpretive Center's grand opening in 2015. Photo by Julia Reischel.

An additional $500,000 is heading for the Catskills under an “aid to localities” umbrella, Senterman said, thanks to Sen. Seward and Sen. Amedore, who won the funding in the 2015-2016 budget. That money wasn’t spent last year, and is being reappropriated this year.

Of that $500,000, $150,000 is earmarked through the DEC to fund the creation of a comprehensive regional recreation plan for the Catskills, which the New York City Department of Environmental Protection will match with an additional $150,000, Senterman said.

The whole $300,000 in funds will go to the Catskill Watershed Corporation, which will manage the creation of the recreation plan, Senterman said.

Other than the DEC’s master plan for the Catskill Park and an access study that was completed in 1999, “there has been no comprehensive park-wide study” of recreation in the Catskills” until now, Senterman said.

Above: Catskill Park advocates in line at the Legislative Office Building in Albany on Catskill Park Awareness Day. Photo by Julia Reischel.

“The goal of this plan is really to create an ongoing menu of projects that can be implemented with ongoing support from Albany,” he said.

The rest of the $500,000 in the “aid to localities” funding will go toward a slew of smaller improvement projects across the Catskills, Senterman said. Those projects include studies of mountain biking near Belleayre Mountain Ski Center in Highmount and Mount Hayden in Windham, as well parking lot improvements and new signage at other locations across the Catskills, he said.

The reappropriated funding reaching the Catskills in the new budget is better than nothing, which is the amount the Catskills have traditionally received in the state budget.

“Five years ago, we had no funding for the park,” Senterman said. “Beyond what the DEC would spend through its very small budget, there was no money coming to the Catskills. We now have almost $1.5 million in committed funding."

Still, without a dedicated line item for the Catskill Park again this year, the Catskills have to scramble for every additional dime they can get.