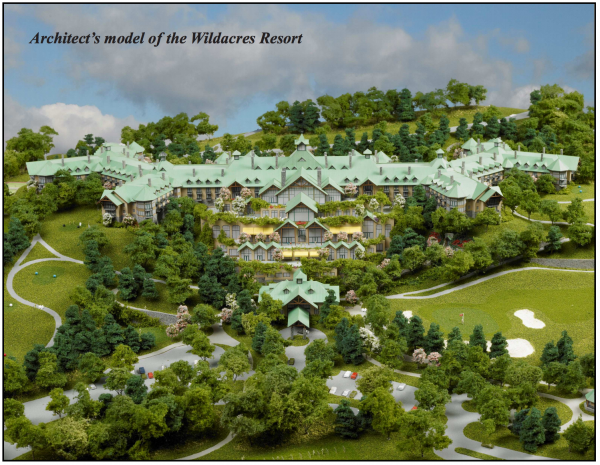 A model of the Wildacres Resort, part of the Belleayre Resort project planned for Highmount.

A New York State Supreme Court judge has ruled to toss out a lawsuit by opponents of the long-planned Belleayre Resort project.

The plaintiffs, an alliance of environmental advocates and wealthy neighbors of the land on which the project is slated to be built, sued the state Department of Environmental Conservation (DEC) last November in an effort to force the agency to hold another hearing on the project. The lawsuit was the latest skirmish in a long, complex and highly technical battle over the resort plans that has kept the project in limbo since 1999. In 2007, plans for the resort were altered and downsized as part of a landmark agreement between project developer Crossroads Ventures, local and national environmental and public interest groups, and New York State and City agencies.

In one of his last actions at the agency, outgoing DEC Commissioner Joe Martens moved to greenlight the Belleayre Resort project in July of 2015. In his decision, Martens canceled the final hurdle that lay between the project and state permits: an "adjudicatory hearing" that would allow the public another chance to weigh in on the scaled-back resort plans.

Martens' decision to cancel the hearing was greeted with little opposition from several environmental groups that had been part of the 2007 agreement, but the project's fiercest opponents -- the Catskill Heritage Alliance and Friends of the Catskill Park, now joined by nearby landowners worried about the project's impact on their properties -- opted to keep fighting for more revisions to developers' plans.

In their suit, resort opponents argued that Martens lacked the authority to cancel the adjudicatory hearing, and that the downsized project design still had significant environmental issues, some of which had not been addressed in previous hearings.

In a ruling issued on Monday, Dec. 5, judge Christina Ryba dismissed both arguments, calling Martens' decision an "appropriate course of action aimed at avoiding unnecessary delay and expense," and dismissing arguments made by project opponents that the DEC had failed to properly consider the project's impacts on stormwater runoff and the visual landscape.

In a statement on Wednesday, Kathy Nolan of the Catskill Heritage Alliance said that the plaintiffs were considering whether to appeal the decision.

While an adverse decision at this level of review is obviously disappointing, the Catskill Heritage Alliance stands by its assertions. The review of Crossroads Venture's proposed project by a professional and independent Administrative Law Judge was legally necessary prior to the Commissioner of New York's Department of Environmental Conservation making rulings about this over-sized and environmentally intrusive project.

The decision acknowledges that the "one hotel, one golf course" (Wildacres only) alternative favored by the Catskill Heritage Alliance actually has the lowest environmental impact of all the resort alternatives. Unfortunately, the judge defers completely to the New York State DEC Commissioner, who allowed Crossroads Ventures to claim that the Wildacres only alternative is not financially viable for them, despite our consultants demonstration that the Wildacres only alternative not only brings more economic benefit to our community but is actually much stronger financially for Crossroads Ventures, as well. The Alliance is carefully weighing our legal option to appeal this entry-level decision.

Gary Gailes, speaking on behalf of developer Crossroads Ventures, told the Watershed Post that the company was hopeful that the verdict would pave the way for action on the project.

"It was a very decisive decision, very tightly written. Our lawyers feel that it's pretty bulletproof," he said. "After several long years of getting through the environmental review process with the state, it was pretty heartening to get this decision. It’s clear that we’re moving in the right direction. It’s one major legal hurdle that we’ve overcome."

If the opponents decide to appeal, Gailes said, that could introduce further delay.

"If an issue isn’t resolved, you lay yourself open to having to make a significant change in how you appproach a development," he said. "People who invest tens of millions want to be pretty certain that a commitment is going to be productive."

But despite years of delays on the project, the developer is committed to building, Gailes said.

"The only motivation for litigation moving forward from here is to delay, delay, delay, in hopes that delay will presumably cause the developers to give up, which is not the case," he said.

In addition to the DEC lawsuit, project opponents and developers are also duking it out legally at the town level. In an October decision in response to a separate lawsuit by the Catskill Heritage Alliance, Ulster County Supreme Court Judge Richard Mott ruled that the Shandaken Planning Board had acted too hastily in granting permits without addressing how several hundred planned lodging units fit in with the town's existing zoning law.

The question of how to define the "lodges," which could be sold as condos or timeshares, is being considered by the Shandaken Zoning Board of Appeals (ZBA). The ZBA will hold a public hearing on the matter on Wednesday, Dec. 21.

The full text of Judge Ryba's ruling is embedded below.

More review in store for the Belleayre Resort?