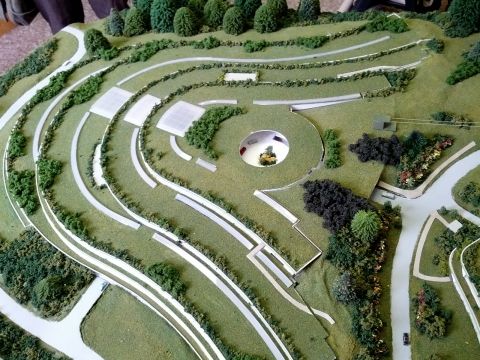 Above: A model of one of the the planned hotels, viewed from above, of the proposed Belleayre Resort project. Photo by Julia Reischel.

The Catskill Heritage Alliance, a nonprofit group that has long opposed the construction of the 739-acre Belleayre Resort near the state-owned Belleayre Mountain Ski Center in the Ulster County hamlet of Highmount, announced on Thursday, Nov. 12 that it is suing the New York State Department of Environmental Conservation over the project.

The DEC approved the project in July, and the CHA's lawsuit was filed on Tuesday, Nov. 10.

The CHA signalled almost a year ago that it might pursue litigation against the DEC over the resort's review process, particularly regarding the agency's decision to cancel an adjudicatory hearing about opponents' concerns. The CHA argues that the adjudicatory hearing should have been required.

The lawsuit could make one of the country's longest development review processes--16 years--even longer. The Belleayre Resort was first proposed in 1999. See our interactive timeline of the history of the project at the bottom of this story.

From a press release issued by the Catskill Heritage Alliance:

Kathy Nolan, chair of the Catskill Heritage Alliance, made the following statement today, announcing that the Alliance is suing the New York State Department of Environmental Conservation to require an adjudicatory hearing on aspects of the proposed Belleayre Resort that DEC failed to consider adequately in its review of the project:

After consultation with our members and other allied organizations, the citizens group Catskill Heritage Alliance decided to file suit against the New York State Department of Environmental Conservation for refusing to return the proposed Belleayre Resort project to an adjudication process required under the New York State Environmental Conservation Law. The adjudication would review a proposed alternative, lower-build plan for the resort, and related matters. This suit was filed on November 10, 2015 at the Albany County Clerk’s Office.

On July 10, 2015, DEC announced it would accept developer Crossroads Ventures LLC’s current plans for the proposed Belleayre Resort, including its two hotels, a spa, an 18-hole golf course, and 629 various lodging units on 739 mountainside acres. The DEC later accepted documents proposing a potential $75 million “full build-out” of the Belleayre Mountain Ski Center, with New York State using public funds to purchase the former Highmount Ski Center from Crossroads and connect it to Belleayre. The project is described in detail in documents the DEC released this September, including the Final Environmental Impact Statement (FEIS) for the resort, the Final Unit Management Plan for the Belleayre Mountain Ski Center, and a Cumulative Impact Analysis.

These final SEQRA documents reveal definitively that important substantive and procedural considerations have been ignored and important modifications have therefore not been required. After careful analysis, CHA has concluded that DEC did not carry out its review of the resort and the proposed expansion at the Ski Center properly, and that to correct that, we need to seek assistance from the courts.

This is not a decision we take lightly. Below is some background on how we reached it, why we concluded a lawsuit is needed, and why the review of the project is not over:

CHA and other citizens groups have opposed this oversized, destructively sited project since it was first proposed in 1999. We have long been on record raising important issues about it before the DEC and the public. We have explained repeatedly how the resort as currently proposed is too large and too environmentally sensitive to be viable, and would end up harming the environment and the local economy.

We pointed out serious problems with anticipated adverse impacts such as flooding, traffic, air pollution and density, as well as the inadequacies of the project’s plans for storm water management. We commissioned independent analysis from well-respected consultants demonstrating the resort as proposed is likely to have high vacancy rates, pull customers from existing regional businesses along the Route 28 corridor, and do damage to our communities’ character as well as their economies. We questioned the wisdom of New York State building new ski trails given predictions of diminishing snowfalls, and the propriety of using public funds and assets to benefit a private, luxury resort. We also proposed a viable alternative: a smaller, lower-build option for the resort that would involve building one hotel instead of two, developing the Wildacres site but not Highmount. A smaller project would reduce the resort’s environmental impact, de-link it from the Ski Center, obviate the need to use public funds, and avoid harming local businesses, while still giving our area an economic boost.

Together with Friends of the Catskill Park and the Atlantic Chapter of Sierra Club, we advocated a compromise along these lines. We made the case for it directly to the DEC, as well as in public meetings and in the media, for example in The Albany Times Union. But DEC largely ignored these arguments. It rejected the Wildacres-only alternative approach on the grounds that it was not economically viable, ignoring our consultant’s clear, credible evidence that a smaller-build, one-hotel approach is not only viable, it is much more likely to succeed economically than the larger, two-hotel version of the project proposed by the developer.

In our view, the Wildacres-only alternative, or something much closer to it than what has come out of the review process so far, is what true compromise would look like. Crossroads proposed its own “compromise” in 2007, making only small concessions on the project’s size and siting. Since then, throughout DEC’s review, we continued to maintain that the one-hotel, one-golf course alternative needed to be fully articulated and fairly considered. The previous year, 2006, adjudicatory hearings on the Wildacres-only alternative and related issues had been scheduled as part of the initial SEQRA review, and they were approved by the DEC’s Acting Commissioner. However, they were subsequently suspended at the direction of then-governor Spitzer as the parties sought a compromise that would be satisfactory to all. Since such a compromise was never reached, and since the hearings are still required under State law, the DEC should not close its review without holding them.

We are hopeful that the court will agree and will require Crossroads Ventures to go before an Administrative Law Judge for a hearing on the Wildacres-only alternative. Unless all the involved parties agree on a compromise, a complete review of the project requires a return to the originally scheduled adjudication.

This is much more than a procedural concern: at stake is whether the project can be sited and scaled in a way that avoids serious environmental and economic harm. At the same time, moving away from the higher-build, more intensive two-hotel approach would avoid the need for New York State public funds and assets to be used to benefit a private developer. These are matters that are vital to the public interest and merit review and determination by an independent and neutral court.

Below: An interactive timeline of 16 years of Belleayre Resort review.