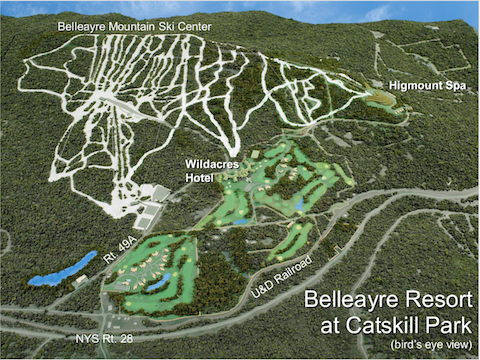 Above: A bird's eye view of the proposed Belleayre Resort, via belleyareresort.com.

A state judge has ordered the town of Shandaken to examine whether the most profitable part of the long-awaited Belleayre Resort, over 200 real estate “lodging units” that could be sold as condos or timeshares, are allowed under the town’s zoning laws.

The decision, which you can read at the bottom of this post, was issued by Ulster County Supreme Court Justice Richard Mott on Thursday, Oct. 6.

It’s the latest move in a lawsuit filed against Crossroads Ventures, the resort’s developer, by the Catskill Heritage Alliance, a nonprofit group that has long opposed the construction of the 739-acre Belleayre Resort near the state-owned Belleayre Mountain Ski Center in the Ulster County hamlet of Highmount.

The decision is the first time that a judge has issued a ruling on the Belleayre Resort, and it is yet another setback for the project, which is already one of the most scrutinized development projects in U.S. history.

Fierce battles over the resort's size and environmental impact have caused the developer to downgrade its plans and have lengthened the project's review process to 17 years and counting. (See our timeline of the resort’s review.)

Now, the resort must undergo additional review by the town’s Zoning Board of Appeals, which must issue a decision about whether “detached lodging” units that could be sold as condos or timeshares are allowed under the town’s zoning laws.

In his decision issued on Thursday, Mott wrote that the Shandaken Planning Board acted beyond its scope when it issued the special use permit for the resort in January 2016.

Specifically, Mott questioned whether the set of proposed lodges and detached multi-unit duplex structures that will be built as part of the resort are allowed under Shandaken’s Zoning Code.

The code allows "lodge development" as part of the construction of a "vacation resort," but never defines exactly what a "lodge" is, the judge wrote.

The resort’s plans currently include a large number of “lodges” and “duplexes” that contain real estate units—163 units in 18 three-story buildings near the Wildacres Resort and 27 in a lodge building near the the Highmount Spa Resort, plus another 16 units in eight duplexes down the hill, according to the Belleayre Resort’s fact sheet.

Such real estate units are often the main moneymakers for resort developers, who can sell them as "residential ‘products' such as timeshares, fractional interests, condominiums and home site sales,” according to a report the New York State Comptroller issued about the Belleayre Resort.

In his decision, Mott said that the Shandaken Planning Board has implicitly approved such detached lodging units without having the authority to do so.

“[T]he inclusion of of the lodges or duplex habitation structures calls for an interpretation of the zoning code that is beyond the Board’s authority because they do not fit the definition of a hotel or motel and lodges are undefined,” Mott wrote. “While no specific finding as to the nature of these structures was made by the Board such a finding is implicit in its approval."

Gary Gailes, the spokesman for Crossroads Ventures, explained what the judge meant in an email over the weekend.

"The Shandaken zoning code currently does not define what a ‘lodge' or ‘lodge development’ is,” said "Only the [Zoning Board of Appeals] can provide that definition."

In his decision, Mott ordered the Shandaken Planning Board to obtain a ruling from the town’s Zoning Board of Appeals that determines whether lodges and duplexes are permitted under the town’s zoning code.

Gailes said that Crossroads does not plan to appeal the court’s ruling.

“We intend to proceed with the additional process identified by the ourt as expeditiously as possible,” Gailes said.

Gailes described the judge’s order Zoning Board of Appeals review as "further clarifying action on technical grounds,” and said that "actually, Crossroads is quite pleased with the decision rendered by Judge Mott.”

The judge "rejected nearly all of the claims that CHA made to challenge the Shandaken Planning Board's approvals,” Gailes said.

But Kathy Nolan, the chair of the Catskill Heritage Alliance, described the ruling as a major setback for the resort.

"It is a momentous point, because Crossroads has claimed all along that there was absolutely nothing wrong with their project, and that the opponents were really being obstructionist,” Nolan said in an interview on Friday.  "And this judge says, no, there’s really a problem with at least this part of this proposal.”

Years of review, then years of litigation

The judge’s ruling is the latest development in a year of litigation over the resort.

In 2015, after years of review, the Belleyare Resort obtained permission from the New York State Department of Environmental Conservation (DEC) to build the amibitous resort on a mountaintop that straddles the Catskills towns of Shandaken and Middletown.

Then the Catskill Heritage Alliance, acting on behalf of diehard resort opponents (including members of the Gould family, who own land near the proposed site of the resort), filed a lawsuit alleging that the Shandaken Planning Board had overstepped its authority when it issued the permit.

The CHA is also suing the DEC for approving the environmental review of the resort; the group alleges that the agency improperly terminated an internal review process.

According to the Daily Freeman, oral arguments in that lawsuit is were held a few weeks ago.

Thanks to the recent litigation, groundbreaking on the resort, which was slated for mid-2016, has been postponed.

Above: An interactive timeline of 16 years of Belleayre Resort review.