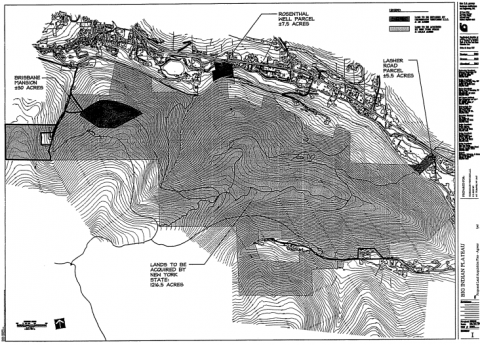 Above: A document showing a roughly 1,200-acre parcel acquired by the state in Big Indian, near the Belleayre Ski Center. Source: DEC website.

The state Department of Environmental Conservation has announced that the agency has completed a proposal to reclassify about 940 acres of a 1,200-acre state-owned parcel in Big Indian near the Belleayre Ski Center, which was acquired by the state in 2011 as part of a deal with the developers of the proposed Belleayre Resort.

In a press release about the proposal -- released on Monday -- the DEC announced that a public hearing would be held the next day to get public input on the reclassification. The hearing is scheduled for Tuesday, September 17 at 7pm at the Belleayre Ski Center's Overlook Lodge.

The classification of the Belleayre parcel is important to local recreational groups, who want to see the land made available for various outdoor activities, and to local environmental groups who want to protect sensitive ridgetop land on Highmount. In July of 2012, the Catskill Mountain Velo Club petitioned the DEC to give the Belleayre parcel a less-restrictive classification, like Wild Forest or Intensive Use, in order to allow local mountain bikers and cross-country skiers to use existing logging roads on the property.

The DEC writes that Tuesday's hearing will "provide an opportunity for the public to meet with DEC staff and share their thoughts, ideas and suggestions regarding management of the newly acquired State lands." The agency will also accept written comments until September 30, 2013. Comments on the plan can be submitted to DEC at the Region 3 office: NYS DEC, Region 3, 21 South Putt Corners Road, New Paltz, NY 12561 or by e-mail to the DEC's Bill Rudge at [email protected].