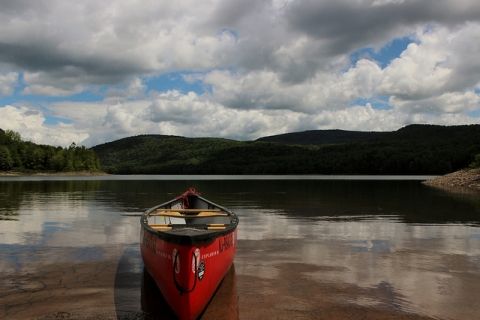 Water is everywhere in the Catskill Mountains, even their name: The “kill” in “Catskills” is a Dutch word for “creek.” There’s plenty of open water to go around for kayakers, canoers, sailors and rowers — especially now that four of New York City’s vast reservoirs have been opened to recreational boating, a development in the past few years. (See our guide to boating the reservoirs.)

Another aspect of the Catskills great outdoors that’s improving: our bald eagle population. If you spend time on our rivers and creeks, you’re likely to have a close encounter with one of these fish-eating eagles, who have been brought back from the verge of extirpation over the past few decades and are now a common sight near Catskills waterways.

Catskills creeks have a tendency to be broad and shallow, and water levels can vary a lot depending on recent rainfall and reservoir releases. When preparing to go boating on running water, check out the water level, or ask a local boat rental company, to make sure there’s enough water to keep you from running aground.

WEST BRANCH OF THE DELAWARE RIVER

Compared to most Catskills creeks, the West Branch is fairly deep, slow and tranquil. Kayakers and canoers will be at home on either the wild upper stretch, above the Cannonsville, or the more managed section below the reservoir, which will feature several new boat launches in the fall of 2014 in Walton and Hamden. The 10-mile paddle from Delhi to Hamden, above the Cannonsville, is a leisurely float through Delaware County farm country.

EAST BRANCH OF THE DELAWARE RIVER

The East Branch has two sections, divided by the 15-mile-long Pepacton Reservoir. Above the reservoir, you can put in at Riverside Park in Roxbury, or behind Freshtown in Margaretville, and paddle all the way to the Pepacton. The other end of the reservoir, below the dam, is also good boating territory: A six-mile paddle from Downsville to Shinhopple takes about three or four hours, and if you rent a boat from Al’s Sport Store in Downsville, you can park your car at the pullout and they’ll drive you to the launch point.

The Esopus Creek in Shandaken, before it flows into the Ashokan Reservoir, is one of the Catskills’ wilder rivers: It’s a world-class trout stream and a Class II/III whitewater with moderate rapids. During the summer and early fall, the New York City Department of Environmental Protection makes occasional scheduled recreational water releases from the Schoharie Reservoir into the Upper Esopus, raising the water level and ensuring a thrilling ride for kayakers. Boaters will have to share the river with a fair number of anglers and tubers, but it’s a fun paddle with a good pullout spot near downtown Phoenicia.

The lower part of the Esopus Creek, where it emerges from the Ashokan Reservoir and runs east to the Hudson River, is calmer and flatter than its up-river counterpart, and it’s a beautiful spot for a tranquil paddle. Put in at the Esopus Bend Nature Preserve in Saugerties, or the beach on Partition Street. Craving a long paddle? Try a trip down the Hudson River from the mouth of the Esopus, at Tina Chorvas Park in Saugerties, down to Kingston’s Rondout waterfront — a good 12 to 13 miles one way. If you need help getting on a kayak for the first time, check out the Kingston Kayak Festival, to be held Saturday, June 14, 2014.

You have to be a pretty good kayaker to handle some Catskills streams, like the Batavia Kill in Greene County, the West Kill River in Schoharie County or the Beaverkill in Sullivan County, all of which contain more whitewater than flat stretches. The RiverFacts website (riverfacts.com) has a list of whitewater kayaking put-ins and takeouts across the Catskills.

Don’t think you need running water to have a good time. The Catskills are packed with ponds and lakes, many of which are open for paddling, kayaking and swimming.

The mill pond at Susan’s Pleasant Pheasant Farm in Delaware County, known as Lake Wawaka, is an accessible way for beginning kayakers to get their sea legs. James Kelly, who runs the place, will set you up with a kayak and send you out into the quiet center of the pond, which features a tiny island and a teeming bird population.

Quiet Alder Lake in Ulster County is the site of a former railroad millionaire’s estate, now owned by New York state. It lies in the shadow of the Balsam Lake Mountain, the location of the state’s oldest fire tower, and features camping, great hiking trails, a picnic area and excellent trout fishing. The lake was also once a fish hatchery.

Twenty-six-acre Colgate Lake in Greene County features camping and a fishing platform, and it is also a popular swimming spot.