St. Patrick’s Day in the Catskills 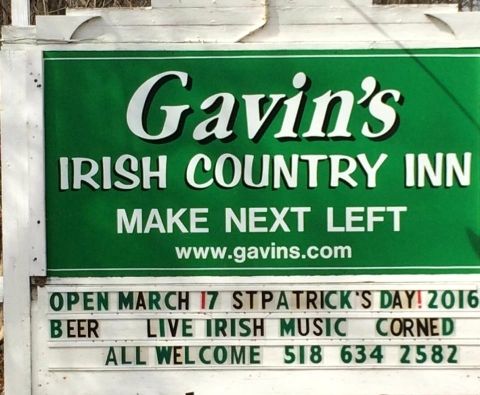 The Irish love affair with the rocky, rolling green of the Catskills spans generations. In the Greene County hamlet of East Durham, especially, immigrants with roots in Ireland have made the region a second home.

So it’s only natural that our communities celebrate the season of St. Patrick in fine style. Here’s our five-county guide to celebrations of St. Patrick’s Day (Thursday, March 17) that are happening this weekend.

Want an introduction to the long history of the Irish in the Catskills? A new documentary that premiered last week, "The Irish Catskills: Dancing at the Crossroads," tells the story of the inns, hotels and bungalows that have catered to Irish Americans throughout history--you can buy the DVD or watch it at Narrowbackfilms.com.

They’re making an afternoon of it on Saturday, March 19 in Delhi. Four pipe bands, several area fire departments and a host of community groups and local businesses will be lining up to march down Main Street at 12 p.m. for the sixth annual Delhi St. Patrick’s Day Parade. After the march, the pipe bands will perform at Courthouse Square. They will be pouring Irish whiskeys for the tasting at nearby Ray’s Fine Wine and Spirits, and O’Neill’s Shire Pub will be rockin’ their Irish with live music featuring the Quinn Brothers and Esquela.

To the folks in charge at Gavin’s Irish Country Inn, Irish is a year-round love affair. Visit their newly opened Irish Tea Shop in East Durham for authentic soda bread and scones, and then come on over to Gavin’s on Thursday, March 17 from 3 p.m. until 12 a.m. for feasting and live Irish music.

The Blackthorne Resort in East Durham has a fine celebration planned for Saturday, March 19: a pub crawl to five different destinations and an Irish gift shop, followed by a feast of corned beef, cabbage and live entertainment back at Blackthorne’s and Sunday brunch the next day. Call 518-634-2541 to reserve.

Come out to the Apple Barrel in Schoharie from 5:30 p.m. until 8 p.m. on either Friday, March 18 or Saturday, March 19 for a celebratory St. Patrick’s Dinner featuring hearty Irish fare, fine beer to be washin’ it down with and the live Irish sounds of Bert Mayne.

The Jeffersonville Fire Department guarantees fun for one and all at their annual parade down Main Street, taking place this year on Sunday, March 19 at 1 p.m.

Narrowsburg will be welcoming in the springtime and celebrating old St. Patty on Sunday, March 20 with the popular Windy Kilt 5K Run at 10 a.m. Proceeds will benefit the Tusten Ambulance Corps and other local charities. At 1 p.m., they’ll have a grand parade, followed up by a get together at the Narrowsburg Inn.

The hamlet of Wallkill will host its classic small-town St. Patrick’s Day Parade on Sunday, March 20 at  2 p.m.

This weekend: St. Patrick's events around the Catskills

The green, green hills of Windham