This weekend: St. Patrick's events around the Catskills 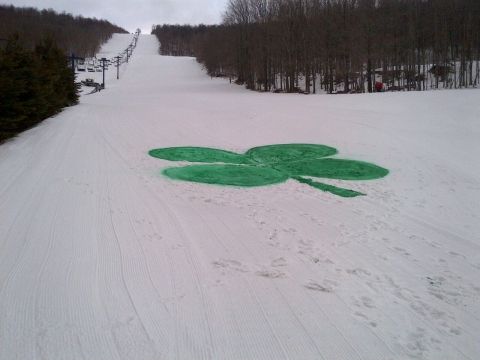 Above: A shamrock on the slopes at Plattekill Mountain.

Why do so many turn part Irish in the season of St. Patrick? Perhaps because there is something primal about celebrating the end of winter by slathering swathes of green everywhere. Perhaps because Irish Americans have a fine sense of humor and the festivities and feastings in their honor, replete with bagpipes and corned beef, hit a spot emotionally that nothing else quite reaches. Perhaps because nothing sticks a fork in cabin fever like getting outside to take in a parade or run in a 5K.

Here’s our multi-county guide to the Irish goings-on this St. Patrick’s Day weekend in Catskills.

The annual Halcottsville St Patricks Day Parade on steps off at noon on Sunday, March 15. It’s a small town classic courtesy of the Halcottsville Volunteer Fire Department. You’re invited to either spectate or participate; come to Halcottsville and line up at the south end of town at 11:30 a.m. with your antique cars, floats, marching bands, circus animals and (of course) fire trucks. The fire department will be raffling off some cool toys: a 48” smart TV, an Android tablet, and a 36x zoom camera.

St. Platty’s Day, happening this year on Saturday, March 14, is an annual family favorite at Plattekill Mountain in Roxbury. The lucky lad or lassie who finds the golden shamrock in the enchanted forest will win a junior season pass for next year; that’s the grand prize, but there are others.  Shamrock hunt signup starts at 8:45 a.m. and the hunt’s at 9:30 a.m.; the live music, corned beef and cabbage, and green beer (sure as you’re born) will be going on till 4:15 p.m.

Come soak your neurons in the Celtic-American sounds of the Dady Brothers, fine troubadours indeed, playing a blend of Irish folk, American folk, bluegrass and the acoustic blues on “including but not limited to… guitar, pennywhistle, fiddle, banjo, octave mandolin, harmonica, uilleann pipes, bodhran and ukulele.” They’re internationally known, and Music on the Delaware has enticed them to the Walton Theatre in Walton for what promises to be a memorable night. It’s happening Saturday, Marcn 14 from 6:30 p.m. to 10 p.m.; open jam at 6:30 p.m., performance at 7 p.m.

The Annual Village of Tannersville St. Patrick's Parade will be stepping off down Main Street at 1 p.m. on Saturday, March 14. They’ll wind up at Village Hall for awards and live music, and there will be refreshments being served at The Spinning Room across the street. (Upate: Tannersville's parade has been postponed a week due to weather, according to the Daily Freeman.)

The Irish I Was Skiing/Riding Festival at Windham Mountain in Windham is happening on March 14. There are leprechaun chases involved; should a kid catch a leprechaun, the gold involved is a chocolate coin, but the exact species of gold an adult will receive is unspecified. One wonders. The fun starts at 11:30 a.m.; from 2 p.m. to 5 p.m. there will be live music from McCana and Tullamore Dew drink specials in the Seasons Lounge.

The Apple Barrel in Schoharie will host a St. Patrick's Day feast of hearty Irish fare and live music for two nights, Friday, March 13 and Saturday, March 14, from 5:30 p.m. to 8 p.m. Slainte!

Want to stock up and have a feast of your own? Schoharie Fresh will be selling a celebratory offering of Irish soda bread muffins, shamrock sugar cookies, Irish oat scones, chocolate mint scones and a vanilla bean cake detailed in green, all prepared with a touch o’ Irish love by Denise’s Kitchen. Order online.

Stir your spirits at the St. Patrick’s Day parade and festivities taking place in Rock Hill on Saturday, March 14. The children’s tent, sponsored by the YMCA, opens at 11:30 a.m. in the Farmers’ Market Lot; the parade steps off at 1:00 p.m. with “live Irish music, bagpipers, local fire and police departments marching, antique cars, horses, floats by local businesses and organizations and more,” which, in a small Catskills town, means you never know what you might see. Billy Latimer will be playing live music from noon till 1 p.m.

Narrowsburg is celebrating on Sunday, March 15. The fun starts with the Windy Kilt 5K, a scenic run that will benefit the Ambulance Corps and CASA; run in your best Irish finery and you could win a bottle of Jameson. After the trophies are passed out, the good times roll as the 3rd annual parade sets out at 1 p.m. All are invited to “create a float, put on your best green, bring your emergency vehicles, commercial vehicles, bicycle, roller skates, or donkey.” A bagpiper will lead the way from the Narrowsburg Inn, which will also host the afterparty.

Eat like an Irish foodie as Eureka Market in Grahamsville brings back their hearty homemade Irish breakfasts in honor of St. Paddy’s Day. Eggs, Irish bacon, Irish sausage, black pudding, grilled tomato, baked beans and Irish brown bread will be the specialties of the house from March 14 through March 17. Breakfast is served from 7:30 a.m. to 11 a.m. on weekdays and 8 a.m. to 1:30 p.m. on Saturday and Sunday.

The Rosendale Café in Rosendale will have a foot-stompin’ good Irish afternoon on Saturday, March 14 as they welcome The Wild Swan Band for an afternoon of Irish Americana from 4:30 p.m. to 7 p.m. Not every world class veggie café has its own Irish house band, but this one does; Jon Garelick, Sarah Underhill and Ian Worpole will perform Irish songs and tunes, accompanied by the lilting strains of guest fiddler Andrea McFarland and Jonathan Pazer on bodhran.

The good folks of American Legion Post 1219 in Tilson are hosting a St. Patricks Dinner Dance on Saturday, March 14. Feast on a corned beef dinner, tip a wee glass and frolic to the sounds of Robin Baker and Breakaway.

Kingston has a well-earned reputation for doing St. Patrick’s right. Broadway, with its center line painted green for the occasion, welcomes the Shamrock Run as hundreds of citizens glide and huff and ramble past, a sight worth seeing in itself. Then it’s time for the parade, and the Ancient Order of Hibernians works hard and successfully to make it bigger, bolder, and better every year. This year’s celebration will happen on Saturday, March 15. The run begins at 12:50 p.m.; the parade follows at 1 p.m. and Irish eyes will be smiling citywide.

St. Patrick’s Day in the Catskills

The green, green hills of Windham